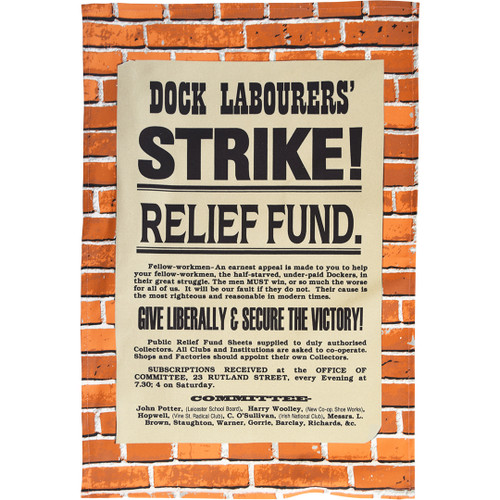 The trades union movement was legalised in the UK in 1871 and was initially dominated by crafts unions serving skilled trades.

The London Dock Strike, which broke out on 14 August 1889, was an industrial dispute involving dock workers in the Port of London. It resulted in victory for the 100,000 strikers and established trade unions among the dockers, one of which became the nationally important Dock, Wharf, Riverside and General Labourers' Union.

The strike is widely considered a milestone in the development of the British labour movement, symbolising the growth of the new unions of casual, unskilled and poorly paid workers, in contrast to the craft unions already in existence.

It also helped to draw attention to the problem of poverty in Victorian Britain and the dockers' cause attracted considerable public sympathy.

Our design is based on a contemporary poster.