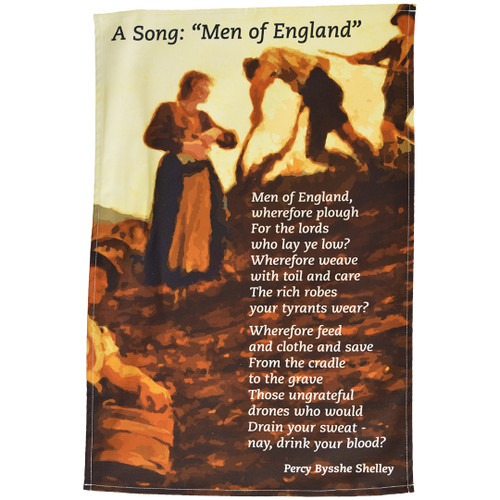 Along with "The Masque of Anarchy" and "England in 1819", “Song to the Men of England” was one of three highly political poems that Percy Bysshe Shelley wrote in 1819 - the year of the Peterloo Massacre in Manchester.

In "Song to the Men of England" Shelley urges ordinary workers to rise up and fight against the exploitation of the many by the wealthy few. The exploited working classes are compared to 'worker bees' in a hive, who collect pollen and produce honey. The wealthy class, on the other hand, are compared to 'stingless' and 'ungrateful drones' who extract labour from worker bees and reap the rewards while doing no work. Workers, meanwhile, gain nothing in return.

Here are the first two verses, which we reproduce on our tea towel:
Men of England, wherefore plough
For the lords who lay ye low?
Wherefore weave with toil and care
The rich robes your tyrants wear?
Wherefore feed and clothe and save
From the cradle to the grave
Those ungrateful drones who would
Drain your sweat—nay, drink your blood?
The image is inspired by a painting 'Farm workers sowing and tilling a hillside' by Hubert von Herkomer.