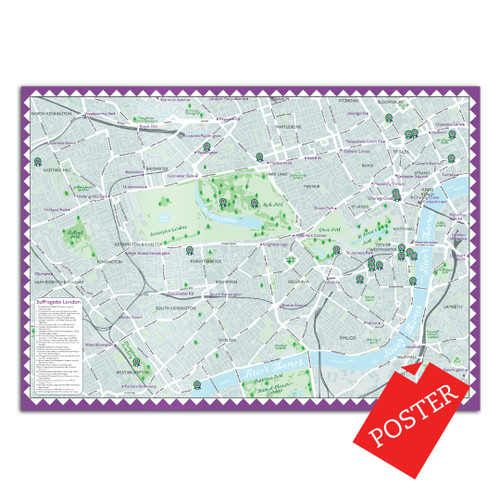 What was a woman’s place in early 20th century Britain? Was it Caxton Hall, the site of Women's Parliament from 1907? Or Trafalgar Square, where Sylvia Pankhurst led a Suffragette demonstration on 27th July 1913? Or was it, perhaps, St Mary's Undercroft Chapel, in a small cupboard where Emily Davison hid on night of 1911 census so that she would be registered as a resident of the Houses of Parliament?

And it started with the Women’s Suffrage campaign: a historical effort by women to claim their mobility: in the streets, in the headlines, in Parliament.

We’ve designed this one-of-a-kind map of London as the Suffragettes knew it – and as the Suffragettes transformed it. Carefully curated in the Suffragette colours of purple, green, and white, this vintage style map based on London's geography circa 1910 shows you the making of feminist history through 25 significant sites, each embellished with a tiny WSPU rosette pin. (It’s the little details, right?)

We know navigating the world today is a mammoth task, so let this richly historical map inspire you to find your way around (and all while making your wall look super chic!)

This geographically accurate map includes pins for the following locations:

A2 sized, landscape style poster (420mm deep x 594mm wide) made with 200gsm Silk FSC Mixed Credit FSC paper. The Forest Stewardship Council is your assurance that the product is made with, or contains, wood that comes from FSC certified forests or from post-consumer waste. Digitally printed.