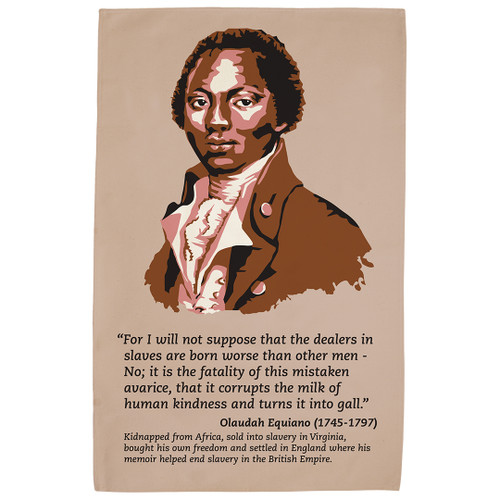 Kidnapped from a village in what is now Nigeria, Olaudah Equiano, known for most of his life as Gustavus Vassa, was sold into slavery in Virginia at 11 years old. After spending eight years travelling the world as slave to a British Royal Navy officer, he eventually bought his own freedom in 1766 for £40 – almost a year’s salary for a teacher. Equiano then worked as an explorer and merchant for 20 years before settling in England, where he supported other ex-slaves. With encouragement from other abolitionists, Olaudah published his memoirs in 1789, entitled The Interesting Narrative of the Life of Olaudah Equiano. This book – one of the first in Europe by a Black African writer – was an instant success, selling out immediately. Through the wealth and platform he gained, Olaudah campaigned as an abolitionist, utilising his voice to help bring an end to slavery. His ability to relate first-hand the horrors of slavery helped sway public opinion, and by 1807 Britain had formally abolished the trade.

The image of Equiano on this tea towel was inspired by an engraving by Daniel Orme which appeared as the frontispiece of Equiano's autobiography.

Half Panama unbleached organic cotton (heavy weight, textured finish). Stitched on all four sides. Includes hanging loop. Measures approximately 48 x 70cm. Machine wash at 40 degrees max. We recommend that before you use your tea towel for the first time you wash it at least once to soften up the material and make it more absorbent for drying dishes. Please note size can vary slightly.