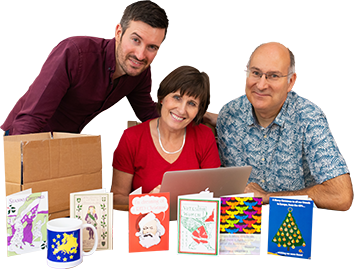 My mother, Pat, was a radical.

A socialist, a feminist, a peace campaigner. A fiercely loyal mother and grandmother.

You'd always hear her sticking up for the downtrodden, whoever and wherever they were.

She spoke her mind, but was polite about it. She'd gladly talk to anyone and everyone.

She was intelligent, frugal and savvy. On any day you might have found her at an art gallery, at home reading a novel, or out on the streets at a demonstration.

She didn't preach her values. She lived them.

I was devastated when she died of cancer in December 2010, aged 78.

The following year, I was looking for a birthday present for her 91-year-old partner, David.

His politics were similar to my mother's, and I wanted to give him something that reflected that. Just not a t-shirt! How about a political tea towel, I thought.

I spent an hour on a fruitless online search and gave up.

That evening, I sat round the kitchen table with my husband, Tim, and son, Luke, who was visiting.

As a family, we've always been interested in the amazing stories of history's radical thinkers and campaigners, and how much hope these stories can inspire relative to the politics of today.

We didn't have much business experience. But we realised that there must be other people with progressive values out there who wanted to give gifts that actually mean something, make you think, and give you hope.

I wasn't sure about the whole 'entrepreneurial' thing. At the time, I didn't know of any middle-aged women starting online businesses.

But Luke told me that my idea of political and inspirational tea towels sounded like a potentially great business, and that Tim's design skills could make it happen.

We all loved the idea that you might come across a design in someone's kitchen, and that it would spark a conversation about an idea or philosophy. As a teacher, I imagined that children might see a design and ask, "Who was she?"

Together we made the decision to start our very own Radical Tea Towel Company.

A few months later, David received his tea towel. It was a bit late for his 92nd birthday, but he loved it!

Sadly David died in early 2012, just over a year after my mother.

Since then, I've worked with my family on slowly growing this little tea towel business of ours.

For years it was just a small side project to the rest of our lives. But customers kept coming back to us, and we decided to focus on learning how to get our name out there on the internet.

We do all the designs ourselves, and get them manufactured in the UK with ethical partners.

People who like the ideas and politics on our designs have shared them all over social media, along with our blogs on radical history. It's been really heartwarming.

Some people like to read about history, and others are more likely to engage with it visually.

Either way, we're happy people are learning about where their rights and freedoms actually came from!

I suspect that were my mother and David alive today, they'd tease us for our homage to 21st-century social media capitalism.

But I also hope they'd be proud.

Thanks for all your support!

We know you already get too much email - but this is different.