Amidst the havoc of the English Civil War, the True Levellers movement called out boldly for social and economic equality – perhaps the most radical vision to come out of an already radical chapter of our island story.

To a point, my life and Gerrard Winstanley’s followed similar paths (ignoring the minor detail that he was born four centuries earlier).

For a start, we're both Lancashire lads – Winstanley born in the parish of Wigan in 1609, and me in Manchester a few hundred years later.

And both of us came down to London to make our way in the world. But at this point, our stories diverge.

Where I turned down the path of studying and writing about Radical History, Gerrard Winstanley crafted the most revolutionary vision to come out of Civil War-era England.

And that’s no small accolade – 17th century England was awash with revolutionary dreams.


Radical England in the Days of Oliver Cromwell

During the English Civil War, millions of Englishmen had rallied against the long-unquestioned power of the king.

Anything and everything seemed possible.

Above: A re-enacted battle scene from the English Civil War by the group Military Odyssey

But within this broad movement for freedom, some elements were more revolutionary than others; and some were hardly less reactionary than King Charles himself.

While mainstream Parliamentarians led by ‘Grandees’ like Thomas Fairfax and Oliver Cromwell did lead the war against the King, they also led the (often violent) effort against any democratisation of Parliament.

This self-contradiction stoked more radical tensions among many rank-and-file rebels – who realised that the generals like Cromwell they were fighting for had no intention of sharing power once they'd gained it.

The Levellers demanded major reforms in the cause of political equality, from the extension of suffrage to the institution of religious toleration.

These were radical positions next to the conservatism of Cromwell and the Grandees, and many of the Levellers were killed for their political beliefs.

But for some in England, even the Levellers’ programme fell short of a true revolutionary vision.

This is where Gerrard Winstanley returns to the story.


From Levellers to True Levellers - A Vision of Social Reform

Prior to the outbreak of the English Civil War, Winstanley had taken up work as a tailor.

But he was bankrupted by the war, and forced to flee London for a desperate little plot of land in Surrey.

From his new perspective on the impoverished margins of society, Winstanley began to see the shortcomings in the Levellers’ outlook.

After all, what good were political freedoms for the millions of English citizens too poor to exercise them?

From this spark came the ‘True Levellers’ (called the ‘Diggers’ by their wealthy detractors). 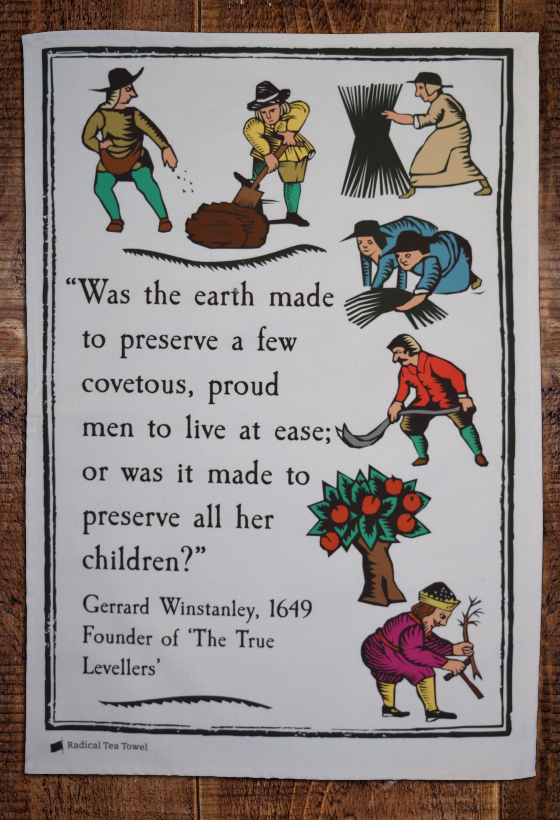 Winstanley’s True Levellers called for the radical redistribution of land and property – they wanted economic, as well as political, equality.

Following the lead of the Wat Tyler and the Peasants Revolt three centuries before, the True Levellers grounded their social egalitarianism in Christian scripture.

Winstanley often called on the Book of Acts in the New Testament, where it proclaimed:

“All who believed were together and had all things in common; they would sell their possessions and goods and distribute the proceeds to all, as any had need.”

But if the Levellers’ political radicalism had unnerved the wealthy bosses of Parliamentarianism, the economic radicalism of the 'Diggers' left them downright terrified.

Cromwell wanted less power for the King, but not the emancipation of England’s workers and peasants.

So when the True Levellers were met with thuggish violence from local landowners after attempting to claim vacant land in Surrey, Buckinghamshire, Kent, and Northamptonshire, Cromwell's Parliamentarian authorities did nothing at all.

The True Levellers were quashed – Gerrard Winstanley’s utopian vision lost in the confusing political violence of the 1640s and 1650s.

But their place in England’s radical tradition remains secure for all time.

Winstanley's call for economic emancipation had been taken up from medieval serf revolts, and its echoes ring out to us in our more recent Radical History: from Peterloo to Tolpuddle, to the Chartists, to the creation of our modern welfare state.

His chapter belongs to a book which is still being written.