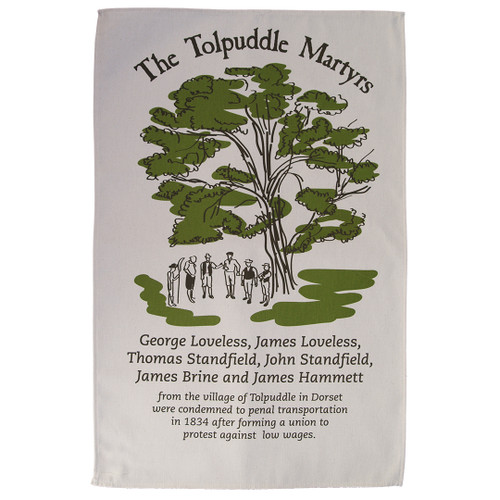 In the village of Tolpuddle in Dorset, 1834, life was hard and getting worse. In their third wage cut in three years, farm labourers were being paid as little as six shillings a week (£20 today), insufficient even to pay for simple food, rent and clothing for their families, despite the long hours and intense manual work. They couldn’t bear it any longer – something had to be done.

Six labourers formed a trade union, the Friendly Society of Agricultural Labourers, swearing a secret oath of solidarity to protest against their meagre pay. Although unions were lawful in this time, the effects of the French Revolution and Swing Rebellion had made the British Establishment fearful of any activity they thought might challenge them. So, on the basis of their secret oath, these six leaders were arrested and sentenced to penal transportation to Australia for 7 years. This was an extremely harsh punishment – an alternative to hanging.

And the public felt it too: a massive protest swept across the country. Thousands of people marched through London and many more organised petitions and protest meetings to demand their freedom. After three years of national protests and the delivery of an 800,000 signature petition to Parliament they were finally pardoned and welcomed home as heroes. And as their legacy, the ‘Tolpuddle Martyrs’, as they became known, helped pave the way for the creation of trade unions and the protection of employees’ rights. The power of the people, for the people…