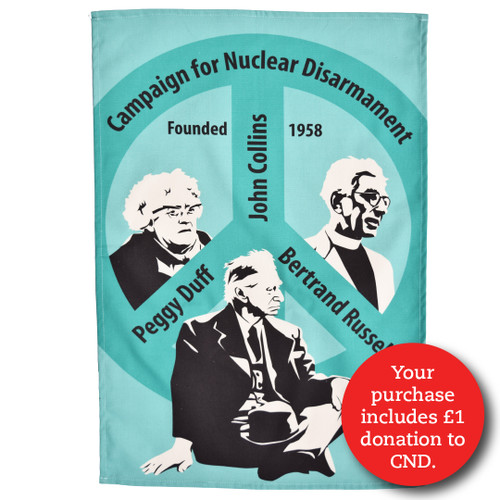 The seeds of the UK's Campaign for Nuclear Disarmament (CND) were sown in 1957 in the wake of widespread fear of nuclear conflict and the effects of nuclear tests. A group of concerned individuals came together and chose Canon John Collins as their chairman, the philosopher Bertrand Russell as their president and political activist Peggy Duff as their organising secretary. The Campaign was launched at a public meeting at Central Hall, Westminster, on 17 February 1958, chaired by Collins and addressed by Michael Foot, Stephen King-Hall, J.B.Priestley, Bertrand Russell and A.J.P.Taylor. It was attended by 5,000 people. At Easter 1958 the first Aldermaston March attracted a great deal of attention and the CND symbol appeared everywhere.

We will donate £1 to CND for every one of these tea towels sold.