Holocaust remembrance often foregrounds lessons about the human capacity for evil if racism, state power, and the process of dehumanisation are left unchecked. It evokes images of the pitch-black uniforms of Hitler’s SS.

But we might also – though not instead – recall green uniforms.


The liberation of Auschwitz

Green uniforms, after all, lie behind the choice of 27th January for this commemoration.

It was the green-uniformed men and women of the 332nd Rifle Division of the Red Army who liberated Auschwitz – the largest of Hitler’s concentration camps – on 27th January 1945 as the Soviets advanced through occupied Poland.

To the West, the British and Canadian troops who, on 14th April 1945, liberated Bergen Belsen – where at least 50,000 Jews were murdered – also wore green. So too did the American soldiers of the US 45th Infantry Division who freed the prisoners at Dachau later that month.

In remembering the Holocaust it is easy – it is human – to be sucked into despair. It's a horrific memory.

Panning from the massacre field at Babi Yar to the medical experiments of Dr Joseph Mengele at Auschwitz, we ask ourselves: "How could human beings do that to one another?"

It's an important question to ask, and keep asking, if we're to keep Nazism buried in the ground.

But to give us hope with which to go forward, we might also ask ourselves of that time, looking at the armies of Eisenhower, Montgomery, and Zhukov: "How could human beings do that for one another?"

Men and women murdered millions at Auschwitz, Bergen Belsen, Dachau, Treblinka, Majdanek, and all the others. But men and women also fought against that murder.

In their green uniforms, millions gave their lives trying to put a stop to it. Scouse tank drivers in Egypt, Texan fighter pilots over France, Belorussian partisans in occupied Eastern Europe.

And put a stop to it they did.


A Rebuttal of Nazism

Hitler dreamt of a 'racially pure', Aryan world. No Jews, no Slavs, and ultimately no Africans, Arabs, or East Asians.

By the time Soviet troops entered the remains of Auschwitz in January 1945, too many had already died in Hitler's Holocaust. One death was too many, of course. Six million Jews and millions more Roma, homosexuals, disabled people, political opponents, Slavs and Soviet prisoners of war, is beyond words.

But perhaps they could find comfort in the fact that a grand alliance of humanity took up arms to destroy their oppressor and set the world free for their families and friends.

The one light in the history of the Holocaust is that it was ultimately defeated. 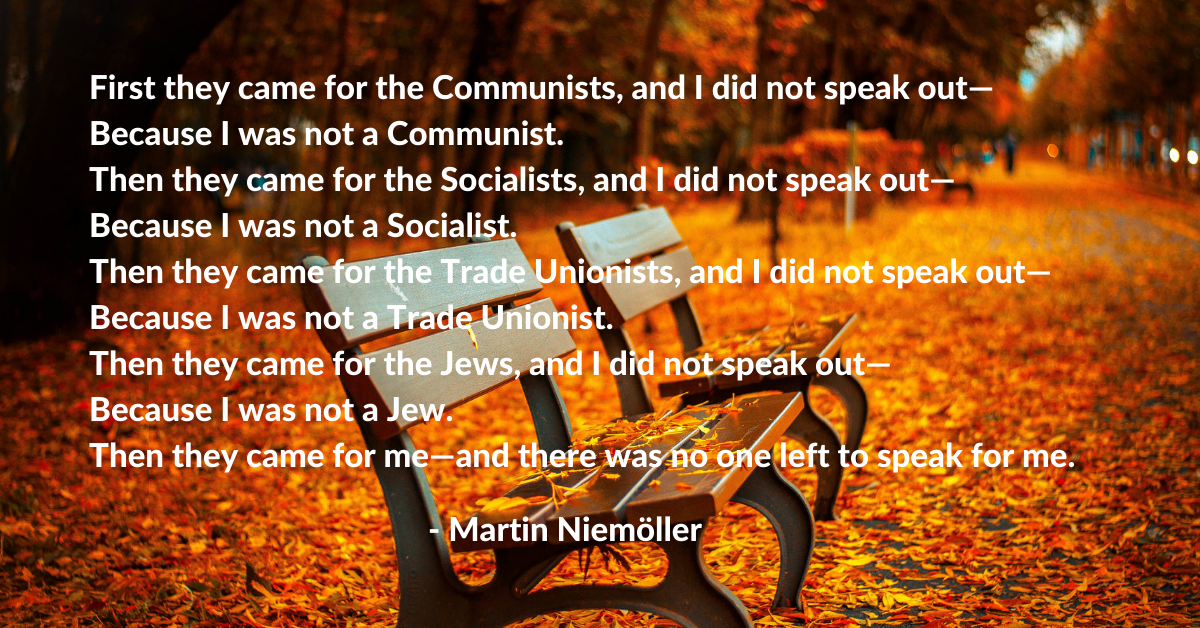 Martin Niemöller’s famous poem "First they came…" was a powerful indictment of passivity - including his own - in the face of Hitler.

In continuing to oppose fascism and its like today, we might take heart from the fact that, once the Nazis had come for the Communists, the Jews, and the Homosexuals - but before it was too late - we came for the Nazis.