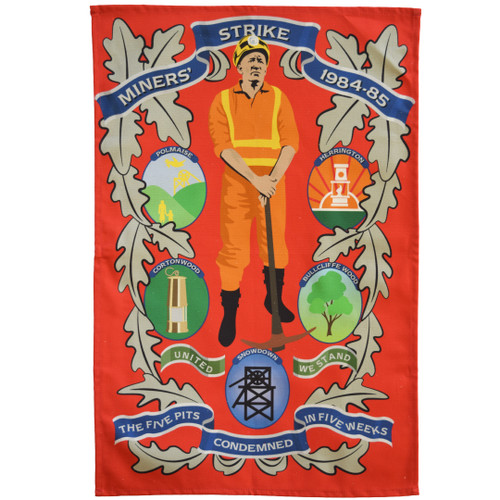 "The enemy within" - that was how Prime Minister Margaret Thatcher and her government saw trades unions in 1980s Britain. They threatened the power and wealth of the rich, and must be suppressed. The Miners' Strike began in March 1984 when, after the Coal Board announced the closure of 20 collieries (i.e. 20,000 jobs) with five earmarked for accelerated closure. Yorkshire miners first walked out and on 12th March 1984, Arthur Scargill, leader of the National Union of Mineworkers (NUM), declared Union support for the Yorkshire men, effectively making the strike national. The last great Miners’ Strike in British history had begun.

Thatcher’s government used the police like an occupying army in mining areas, most infamously at the Orgreave police riot of 18th June 1984. But solidarity poured in from all sides. Other unions – the dockers, the railway workers – stood in solidarity with the NUM. You can read more about this support in our blog post: https://radicalteatowel.co.uk/radical-history-blog/we-will-support-you

This tea towel is designed in the fashion of a miners' union banner, and features the five pits earmarked for accelerated closure.