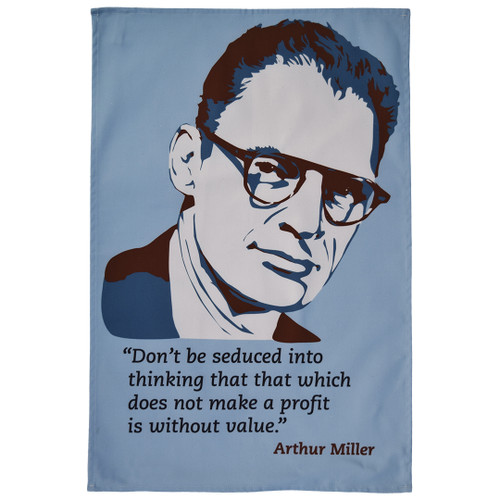 This tea towel celebrates Arthur Miller, one of the leading US playwrights of the 20th century, with notable works including All My Sons, Death of a Salesman, and The Crucible. He based this latter play on the 17th-century witchcraft trials in Salem, a series of persecutions that he considered an echo of the McCarthyism (named after Senator Joe McCarthy) of his own day, when investigations of alleged subversive activities were widespread. McCarthyism formed part of the Second Red Scare that permeated US politics during the Cold War period. Such investigations eventually caught up with Miller too.

In 1956 Miller married Marilyn Munroe and was subpoenaed by the House Un-American Activities Committee or HUAC, a government organisation which looked into the activities of individuals and organisations suspected of Communist ties. In his appearance before the committee, Miller refused to "name names" saying "I could not use the name of another person and bring trouble on him" and as a consequence he was fined, imprisoned and blacklisted. His conviction was eventually overturned by the court of appeals.