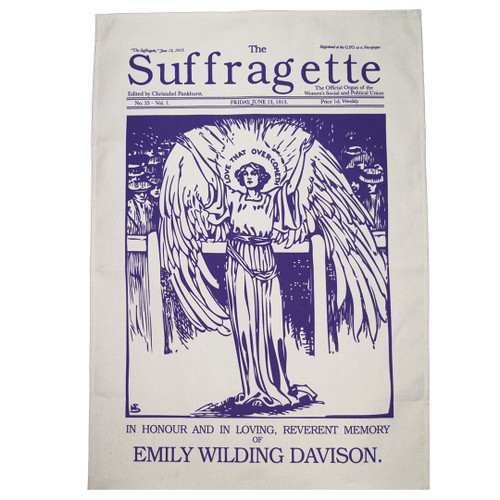 This feminist gift celebrates Emily Davison, one of Britain’s most famous (and radical) suffragettes. It features the cover of the Suffragette Newspaper, published the day before her funeral procession in London. Davison had died on 8th June, 1913, from injuries sustained at Epsom racecourse where, four days earlier, she had stepped in front of the King's horse as a protest for the right of women to vote. After her death, she became a martyr for the suffragette cause – but she was making waves in first-wave feminism long before then.

Davison adopted radical messages to get her message out, getting more involved in the Suffragette movement’s more militant side. After joining the WSPU in 1906, she gave up her job to become a full-time activist. She went on hunger strike a reported 49 times and was arrested 9 times. In 1911, while the Government was taking a census, she hid in a cupboard in the Houses of Parliament overnight, thus being registered as living in the palace. She used this to claim the same political rights as men. Although Davison died before she could see the fruit of her efforts, women finally gained limited voting rights in 1918 and the same rights as men in 1928. Here’s the perfect kitchen accessory for her legacy!