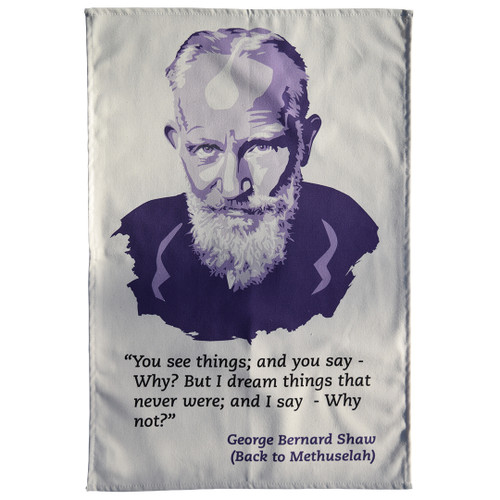 This quotation, a line delivered by the Serpent to Eve in Shaw's play 'Back to Methuselah', opens our minds to the world of possibility. The quotation was paraphrased by Senator Robert Kennedy in a speech in 1968 and the phrase became very much associated with the optimism of the Kennedys’ America.

George Bernard Shaw is a hugely celebrated playwright today, but his first five novels all failed. It wasn’t until he was aged 38 that he made his professional debut as a playwright. His first play to bring him financial success was 'Arms and the Man' (1894). The press found the play overlong, and accused Shaw of mediocrity but the public disagreed. Shaw then spent some time involved in politics and, as a Fabian delegate, attended the Bradford conference which led to the foundation of the Independent Labour Party. By the later 1890s Shaw's political activities lessened as he concentrated on making his name as a dramatist, writing more than 60 plays. He won a Nobel Prize for Literature for his play The Apple Cart and then an Academy Award for his cinematic adaptation of Pygmalion – making him one of only two people to date holding both awards. (The other is Bob Dylan.)

Shaw used his works as vehicles to disseminate his (at the time) controversial views on women’s rights, health care, minimum wage reform, and the protection of the poor. Fully of vitality, he carried on writing into his nineties until he died aged 94. When asked about his impending death, he replied ‘Well, it will be a new experience, anyway.’