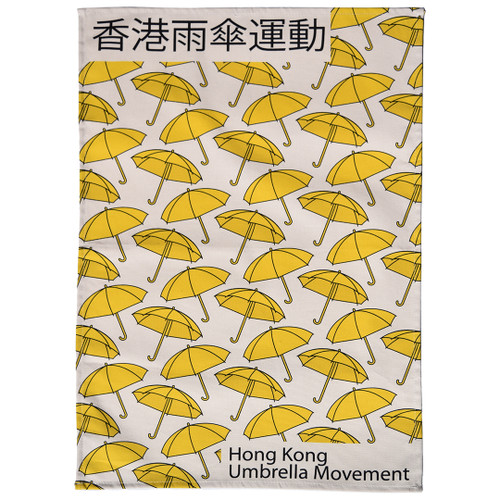 Hong Kong started out as an island, claimed for the British Empire in 1842, and  subsequently expanded, mostly with the purchase of a 99 year lease on land on the mainland of China. When the lease came to its end, China pressed for the return of the whole territory to its control. In 1997, the UK made an agreement with China for "one country, two systems", hoping that would safeguard the personal liberties of the territory's population. Yet Hong Kong's people felt their rights increasingly trampled on, and demonstrators brought the territory virtually to a standstill in 2014 demanding the right to pick their own leaders. This was the birth of the so-called 'Umbrella Movement' or 'Umbrella Revolution'. Umbrellas were used in defence against the Hong Kong Police's use of pepper spray to disperse crowds, and became a symbol of non-violent resistance.

Further steps to limit freedoms have continued, the latest being the incarceration of pro-democracy politicians in 2020.

This tea towel celebrates the indomitable spirit of the Hong Kong people and their aspirations for freedom and justice.