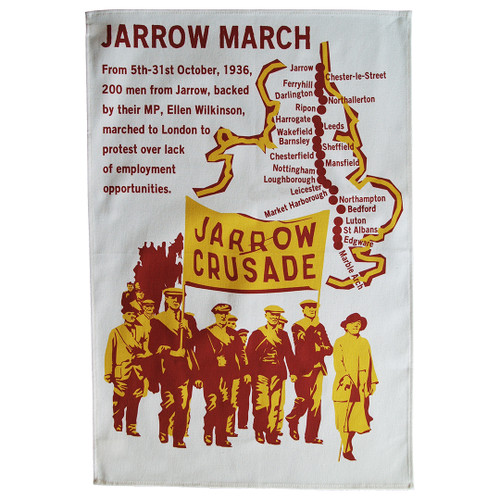 Here’s the story of one of the defining events of the 1930s. On 5th October 1936, two hundred unemployed men and their local MP, Ellen Wilkinson, marched from Jarrow to London. They carried a petition, signed by nearly 12,000 Jarrow citizens, requesting the re-establishment of industry in the town after the closure of its main employer, Palmer's shipyard. Once a prosperous industrial town, by 1936, Jarrow was one of the most disadvantaged and depressed towns in England: out of a population of 35,000, there were 6,000 on the dole and 23,000 on relief. Only 100 out of 8,000 skilled manual workers were employed. The global Great Depression had hit hard, as had Conservative policies. There was no work. The marchers merely requested employment.

When the marchers tried to present their petition to parliament, the Prime Minister refused to even meet them – but this didn’t matter. The March hit headlines all over the country, becoming an iconic moment in British labour history. At the time it achieved little, but its success lay in its future: it shaped post-war perceptions of the 1930s, and became a symbol of resistance against unjust government.

Let this historical gift inspire you to fight for justice!