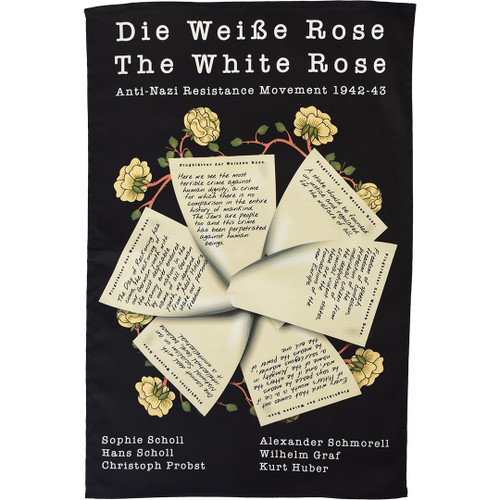 The White Rose (Weiße Rose) is a powerful example of youthful resistance to the Nazi Regime - a small endeavour with large consequences. It was a resistance group run by students at the University of Munich who distributed leaflets and used graffiti to decry Nazi crimes and the political system, while calling for resistance to the Nazi state and the war.

At its core were siblings Hans and Sophie Scholl, their fellow students Alexander Schmorell, Willi Graf, Christoph Probst, and a professor of philosophy and musicology at the University of Munich, Kurt Huber.

Together they published and distributed six pamphlets, first typed on a typewriter, then multiplied via mimeograph. They gave clear advice and advocated sabotage of Hitler’s war machine and passive resistance to the Nazi regime. At first, they only distributed them via mail, sending them to professors, booksellers, authors, friends and others—going through phone books for addresses and hand-writing each envelope. In the end, they distributed thousands, reaching households all over Germany.

In what is now an iconic scene in every movie and documentary about the group, the moment that changed everything was when Sophie pushed a stack of pamphlets off a railing unto the central hall at the university. This was seen by a Nazi janitor who had Sophie and her brother Hans ,together with their friend Christoph Probst, arrested by the Gestapo. All three endured arduous interrogations and a mock trial and were put to death by guillotine. Their three friends were also executed later that month.

Today the White Rose has become a revered symbol of the importance of acting according to one’s beliefs and of following your conscience, even in the face of great sacrifice.