Ask a left-leaning Briton what the most momentous election of modern times was and they'd typically say 1945.

That makes sense - Clement Attlee was catapulted into office with a landslide unprecedented in Labour's history. Long-overdue restraints were whacked on British capitalism and  Nye Bevan put together the revolutionary National Health Service.

But the December 1918 vote - called one hundred years ago today by David Lloyd-George - deserves our attention as well. 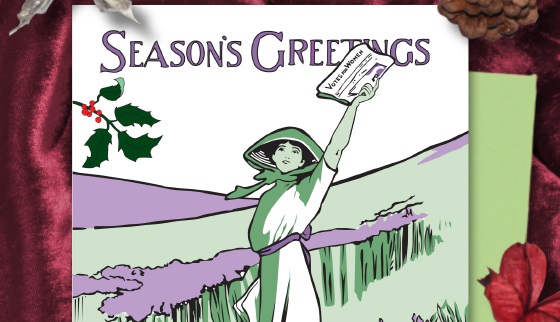 Above: Suffragette poster adapted to a Christmas card by Radical Tea Towel


The Representation of the People Act

As a result of the February 1918 Representation of the People Act, 8.4 million women exercised their newly-won right to vote for the first time, as well as 5.4 million working-class men.

The Labour Party became the second largest Party in the country for the first time, while Ireland voted overwhelmingly for separatist Sinn Fein candidates like Constance Markievicz.

There was a lot of radical change in the air - far too much to fit into one email.

So, for today, let me focus on just one part of it.

Even with the restrictive age and property qualifications, the participation of women was without doubt the most unprecedented thing about the 1918 election.

This was a formidable achievement for the feminist movement. It was the fruit of years of hard graft and civil disobedience by tens of thousands of women activists. A testament to Annie Kenney's ordeal at the hands of the force-feeders, to Emily Davison's martyrdom at Epsom, and to all their sisters.


Divisions within the Suffrage movement

But as argued by radical historian Howard Zinn, celebration and satisfaction are the luxuries of conservatism.

Self-criticism and restlessness - these are the tasks of the Left. And the suffrage movement is no exception.

Even when we ignore (a big ask) the continued exclusion of working-class and/or young women, the Representation of the People Act came with several drawbacks.

Getting the British patriarchy to finally give some serious ground to the suffrage movement took some political concessions - at times outright betrayals - by even the radical wing of contemporary feminism. 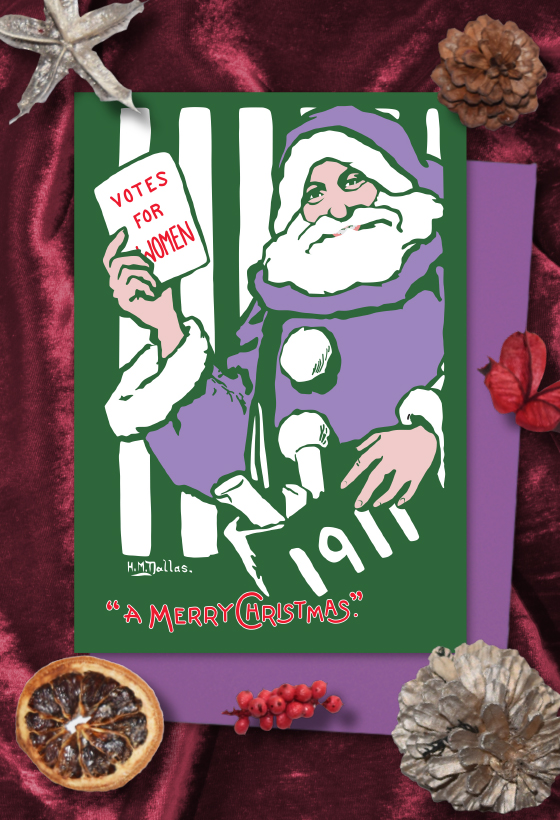 Above: 1911 Suffragette Christmas card inspired by a Hilda Dallas design

By 1913, at the head of the Women's Social and Political Union (WSPU), Emmeline and Christabel were becoming increasingly autocratic in their leadership style.

It was their version of suffragism or else. And their version was increasingly hostile to the promising links then forming in Britain between feminism and the labour movement.

Not even family members were spared the effects of this right turn.

The youngest Pankhurst, Adela, was pressured out of the WSPU in 1913 for her belief in the need for closer ties with British socialism. (Emmeline would soon heartlessly exile the financially-precarious Adela to Australia, never to see her again.)

In January 1914, the same hammer struck Sylvia. In November of the previous year, she had spoken at a trade union rally in support of the Irish socialist, Jim Larkin, who was currently in jail. This solidarity was enough for Sylvia and her following of socialist suffragettes to be booted out of the WSPU.

Emmeline and Christabel only got worse with the outbreak of the First World War.

While Sylvia (and Adela in faraway Australia) joined with courageous radicals across the globe in opposing the war as an imperialist stitch-up, Emmeline had the WSPU suspend all suffrage activity to support the government's war effort.

Emmeline toured Britain, trying to shame young men into volunteering for near certain death at the Front. She went to America in 1916 - where true radicals like Emma Goldman and W.E.B. Du Bois were doing all they could to keep the US neutral - to encourage Woodrow Wilson to send American boys to their deaths as well.

Emmeline even returned in 1918 to pressure the US suffrage movement to follow her example and stop agitating for the vote now that America had joined the conflict.

Above: card inspired by 1909 'Red Santa' postcard design used by the US Women's Suffrage movement


More progressivism was yet to come in the fight for equality

Emmeline and Christabel's turn to the nationalist, anti-socialist, right wing in the 1910s is one of the great betrayals in the history of radical politics. A genuine tragedy considering how much they had both given to the cause of liberation.

And this betrayal cannot be separated from the ultimate enfranchisement of women.

It's undeniable that the WSPU's Tory-fication and embrace of jingoism was an important factor in causing a bunch of rich, old, male MPs to concede (some) women the vote. Loyalty to the Empire scored big with their kind.

The story of women voting for the first time in 1918, then, cannot be re-told without a chapter on the partial co-opting of some powerful suffragettes by the forces of Edwardian reaction.

In no way does this devalue the sacrifice of first wave feminists. Most never betrayed the radical cause like Emmeline and Christabel, and that betrayal didn't corrupt enfranchisement.

The 1918 Act was an undeniably progressive law, especially for its time, and it opened the way for an even better one in 1928 (when women were made electors on the exact same terms as men).

Far from raining on the parade, by refusing to ignore the few stains on the suffrage story we learn practical lessons for radical politics. For a start - be more like Sylvia Pankhurst, who, unlike her mother and older sister, continued to agitate for feminism, socialism, anti-colonialism and peace until she died.

While all suffragettes could claim with pride to have been 'First in the Fight', not all could claim like her to have stayed in it to the end.