It's the 4th of November, 1839. The last serious armed rebellion against authority in Britain is about to take place...

A year earlier, a movement called the Chartists had come forward demanding the vote for every man in Britain.

They also wanted democratic reforms like secret voting and abolishing the need for Members of Parliament to own property, as listed on our People's Charter tea towel: 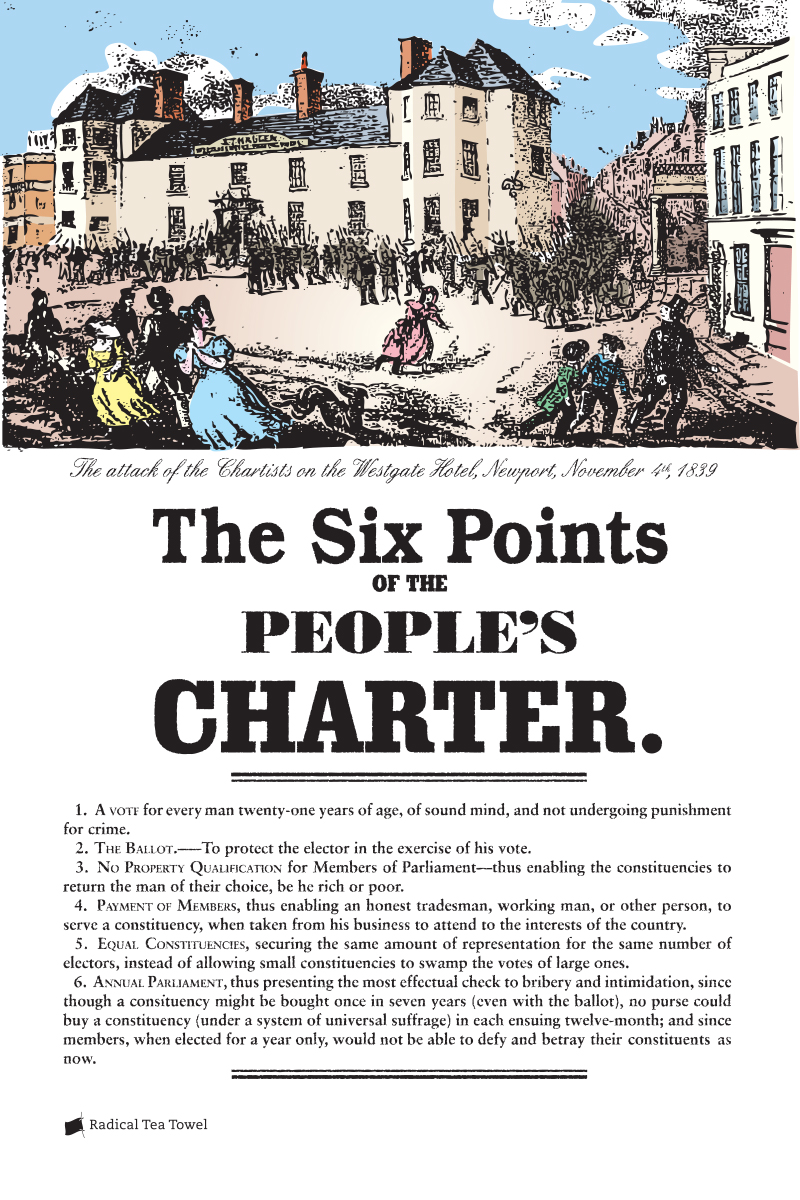 By summer 1839, the Chartists had gathered a petition to parliament with 1.25 million signatures demanding change. The elites laughed them out of town.

Now winter has come, and things are about to get dirty...

John Frost is leading 10,000 Chartist sympathisers into the South Wales town of Newport. The goal is to protest and free some fellow Chartist campaigners who are being held hostage by the government in the city's Westgate Hotel.

The men, mostly local miners, are armed with home made pikes and firearms.

It's raining heavily. The men are tired and fed up. But they reach the hotel and demand the release of their friends.

No one knows for sure who fires the first shot. But an hour later, around 22 rebels lie dead, with 50 wounded. On the other side, 4 people defending the hotel, including Newport's mayor, are wounded.

The Newport Rising has failed.

Today in 2017 Britain, this is what is meant when you're told "people died for your right to vote."

Newport's mayor was knighted by Queen Victoria for crushing the rebellion.


What of the Chartist's leaders and their fight for extended franchise

Initially they were sentenced to be hanged, drawn and quartered. You know the one - that gruesome pull-out-your-insides death that happens to Mel Gibson at the end of the film Braveheart, while he screams "FREEEEEDOMMM!"

Luckily, a nationwide campaign by the Chartists succeeded in reducing the leaders' sentence to deportation for life. They became working class heroes.

Frost was eventually pardoned and came back to Britain to continue the campaign.

The Chartists kept up the pressure. They held demonstrations, like this one advertised on our Chartist tea towel:

The Chartists eventually won democracy for Britain, at least for men.

For women, on the other hand, there was a lot further to go.

But that's a story for another time.