It's been a lot of fun building up the Radical Tea Towel Company over the years. But what are we for, why do we keep going, and how does it relate to something German writer Bertolt Brecht said about 'political illiterates'?

If you've read our story , you'll know that we first kicked off when Bea (my Mum) had trouble finding a politically-themed yet practical birthday gift for an elderly relative (her mother Pat's partner David, a teacher and trade unionist).

Bea thought that someone out there should start making political and philosophical tea towels. My father Tim and I thought that someone should be her! So we all teamed up, with Bea researching manufacturers, Tim doing designs, and me doing the initial business admin and working out how to get our name out there. 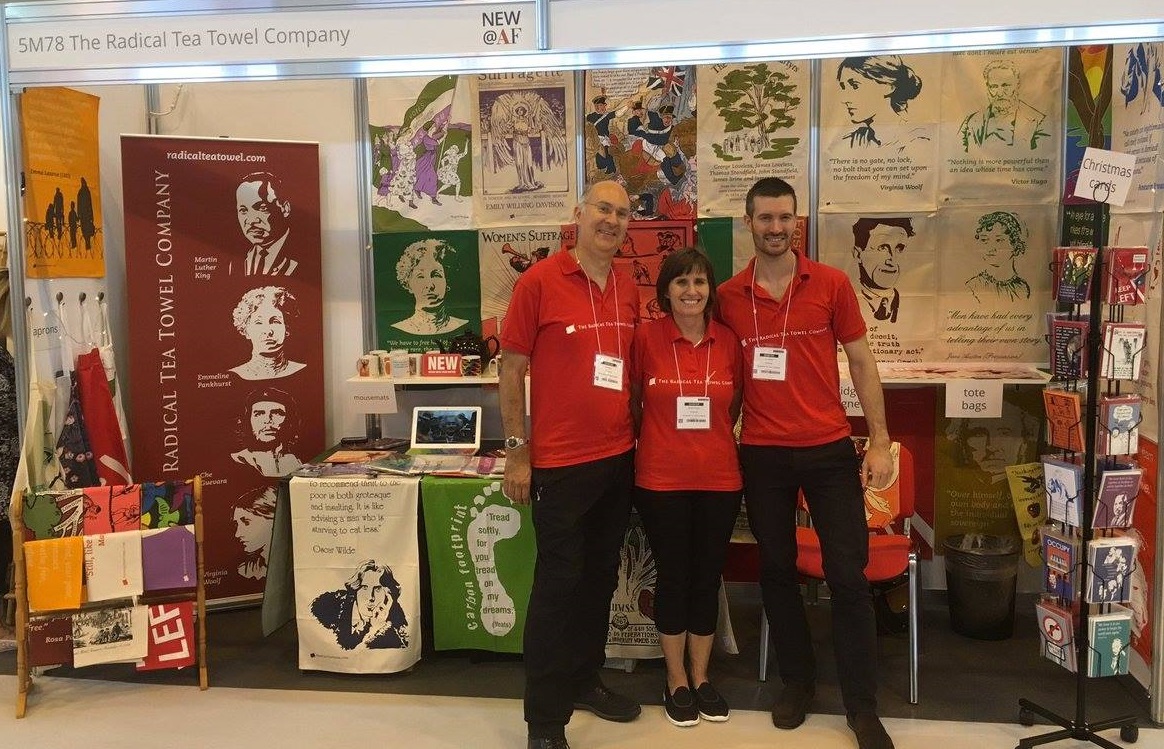 The Radical Tea Towel team at a trade show in Birmingham

It’s an interesting experience, this whole start-up business thing. You have to juggle several projects at once: getting products designed and made, the website (more work than it seems!), suppliers, retailers, social media, and of course the customers.

Today, we still get the tea towels made by British manufacturers. We don't pack the orders from our front room in South Wales any more though - we have a great team in a warehouse down in Kent to help with that :)

But it's still a personalised service - every order is carefully prepared, and we still do all the customer service ourselves. We always love hearing from you!

It's been fun to start a small business and work together as a family (despite the occasional disagreement!). But there's a bit more to this than earning a living.

The family has always been interested in politics, particularly that of a lefty or radical hue.

When Tim and Bea were younger, their friends would joke that the couple would join any protest going. It was a sort of variation on the idea of their parents' post-war attitude of "if you see a queue, join it" - so, "if you see a demo, join it."

I also did a fair amount of protesting in my youth. To my great shame though, I missed out on the big demo of my generation - the anti-war demonstration in London before the Iraq invasion in 2003. It's still seen as probably the biggest protest march ever in the UK. Everyone else in the family (including grandma Pat and David) went on this but me (I was in some forest riding bikes I seem to remember - also a lot of fun!).

We're still prone to sympathise with demos - Tim and Bea recently attended an anti-Trump protest in Cardiff. Though these days we're probably more likely to be found watching Question Time, signing petitions or voting in elections.

We never wanted to be accused of being one of Bertolt Brecht's 'political illiterates':

"The worst illiterate is the political illiterate, he doesn’t hear, doesn’t speak, nor participates in the political events. He doesn’t know the cost of life, the price of the bean, of the fish, of the flour, of the rent, of the shoes and of the medicine, all depends on political decisions. The political illiterate is so stupid that he is proud and swells his chest saying that he hates politics. The imbecile doesn’t know that, from his political ignorance is born the prostitute, the abandoned child, and the worst thieves of all, the bad politician, corrupted and flunky of the national and multinational companies." - Bertolt Brecht

Radical tea towels - as well as earning us our bread - are our little contribution to raising political awareness. They're a nod to some incredible thinkers and doers - both individuals and movements - from the past, and a reminder for us all today.

When someone out there sees a Chartist tea towel in their friend's kitchen and asks 'who were the chartists?', then we're happy to know they'll get some exposure to the amazing show of how democracy came to Britain.

Or if a Suffragette apron prompts a discussion on the bravery of those heroines and the privilege of voting, great. Or if that  Keep Left mug at work allows two co-workers to bond over their shared political outlook, that makes us feel a bit warm and fuzzy.

And then there's our emails: everything from Oscar Wilde and his trial for indecency, to how radical tea towels made it into North Korea. Mostly we do some reading then try to put together an interesting story for you about a radical movement or person.


A future built in radical history

So Radical Tea Towel, I suppose, does many things - from solving that gift idea problem, to spreading the word, educating ourselves, and having fun as a family. There are many ways of earning a living that might do one of those things - but no others that do all of them.


Today we're expanding that 'spreading the word' and educational elements of our project - by excitedly re-launching our blog. As well as my own ramblings, we have a new writer on board - Pete Morgan, who's based in Manchester and is a bit of a political history buff. He's got a great writing style and we're going to be sharing some amazing stories about radical history with you over the coming months.