Let's start with an important point of order:

Now to our second point of order: International Women's day is in fact socialist.

It’s important because it’s too often forgotten – and yet without knowing its socialist origin story, the history of International Women’s Day makes no sense.

The story begins in the heat of the early 20th century German class struggle. In 1907, an International Conference of Socialist Women took place in Stuttgart, with members of the German Social Democratic Party – the first properly successful Marxist party in Europe – taking a lead role.

The Conference of Socialist Women called on all working women around the industrial world to join the struggle for a universal franchise in alliance with the global socialist movement – the only major political force supporting women’s suffrage at the time.

Above: On 8 March 1917, Russian women marched through the streets of St Petersburg demanding "bread and peace," in events which would result in the abdication of the Tsar four days later, beginning the Russian Revolution

A couple of years later, with this alliance between feminism and socialism becoming more and more entrenched, American socialist women took up the initiative and proclaimed 28th February ‘Women’s Day’ in the US.

In 1910, a socialist conference in Copenhagen followed the Yanks’ lead.

Written by Luise Zietz, a resolution was submitted saying:

“In agreement with the class-conscious political and trade union organisations of the proletariat of their respective countries, socialist women of all nationalities have to organise a special Frauentag ['Women’s Day’], which must, above all, promote female suffrage.”

In passing this resolution, the Copenhagen delegates created International Women’s Day as we know it today.

The first one was actually held on the 19th of March, not the 8th. The international women’s movement at the time was still concentrated in Germany, and 19th March was the anniversary of the 1848 Berlin Revolution – a big day in the German radical calendar.

Hoping to make the most of this, the first International Women’s Day celebration was set for 19th March 1911.

Germany was showered with flyers reading:

“Comrades! Working Women and Girls! March 19 is your day. It is your right. The Socialist women of all countries are in solidarity with you. March 19 should be your day of glory!”

19th March 1911 was a day of glory indeed – a day when over a million women took to the streets of Germany under banners reading “Forward to female suffrage!”

After such a successful beginning in Germany, International Women’s Day began its march around the world, settling on the slightly earlier date of 8th March in the process.

Socialist women in the US, Switzerland, Denmark, and Austria also took it up in 1911, soon to be followed by their sister-comrades in France, the Netherlands, Sweden, and Czechoslovakia. 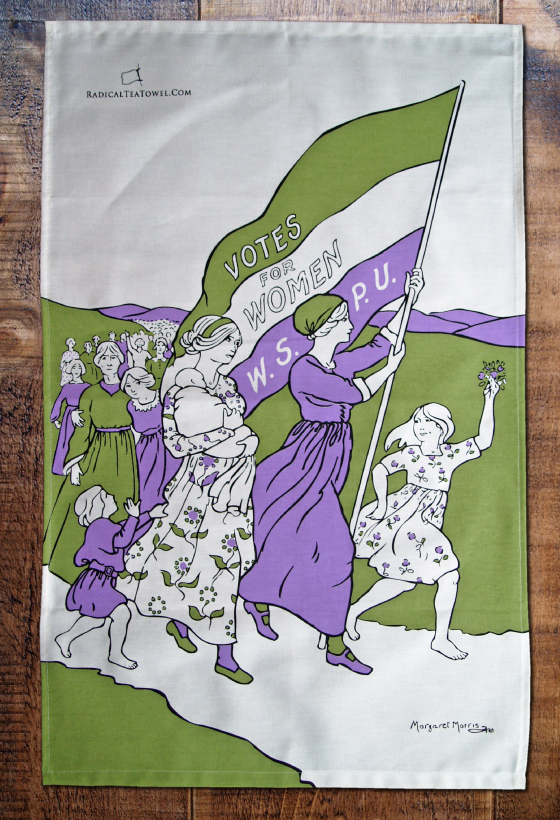 Above: Our tea towel design celebrating the original 'Women's March'

In 1917, 8th March was sealed for eternity as the day for celebrating international feminist radicalism when Russian women marching through St Petersburg for International Women’s Day started the chain of events which overthrew the despotic Tsar and set off the Russian Revolution.

Four years later in Moscow, the Second International Conference of Communist Women (chaired by Clara Zetkin, the German socialist who’d seconded the Copenhagen motion a decade earlier) formally proclaimed 8th March a global event and since then it’s stuck, being adopted by the United Nations in 1975.

International Women’s Day, then, has a rich, socialist history – but the socialist part has (been) disappeared from view.

It happens all too often when an event or progressive idea once considered too radical comes to be respected by lots of people. The socialist dimension starts to ‘magically’ vanish.

Those vested in maintaining the economic status quo don’t want things which have massive popular respect – like International Women’s Day – to be acknowledged for the other radical ideas they may embody.

So, tribute articles and books start showing up with glaring omissions – we get histories of UK women’s suffrage with no mention of James Keir Hardie’s Labour Party, or Sylvia Pankhurst's insistence that feminism and socialism are inseparable causes.

Papering over such links between the movement for economic fairness and events like International Women’s Day isn’t just a petty attempt to deny socialism a few points on the historical scoreboard.

It also does some real ideological damage – obscuring theoretical connections between the battle for gender equality and the struggle for economic justice, which once seemed obvious to those in the heat of the fight.

In light of all this, perhaps you could take a moment today to remind friends about the original history of International Women’s Day.