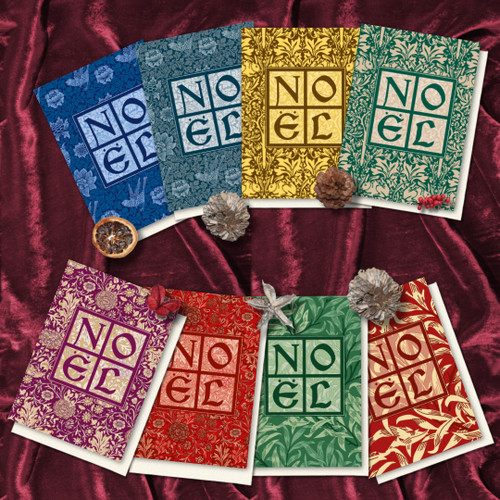 A British artist, poet, novelist, and ardent socialist, Morris is best known as the 19th century's most celebrated textile designer, responsible for the some of the most recognisable textile patterns from the century. He was a radical in both his art and politics, refusing to follow the consensus. Disillusioned by the Victorian era's focus on dehumanising industrial systems that produced poor-quality, 'unnatural' objects, Morris championed a principle of handmade production, establishing the British Arts and Crafts Movement. Aware of the deep divisions in contemporary society, he declared himself a socialist, and in 1884 he helped set up a new group called the Socialist League, making frequent street-corner speeches and using his fame and artwork to further these objectives.

This pack of eight Christmas cards features four designs with the addition of a "Noël" motif. There are two of each design, with eight different colour ways, as follows:

Willow Bough - Inspired by walks in the countryside, Willow Bough was one of William Morris's most successful early designs.

Cherwell - Many of Morris's designs, like this one, were named after rivers whose attendant foliage had fascinated him.

Brer Rabbit - William Morris's famous Brer Rabbit design is taken from a 17th century Italian silk. It was named after the Uncle Remus children's books, a collection of animal stories, songs and folklore which Morris read to his daughters, Jenny and May.

Pack of 8 cards, with white envelopes made of recyclable eucalyptus paper. The cards are printed on FSC certified board which is manufactured from fibre sourced from sustainably managed Swedish forests, the most environmentally friendly option available (we don't use recycled board because that has to be bleached with harmful chemicals). The cards measure approx 105mm x 148mm (A6) and envelopes measure approx 162mm x 114mm (C6). Message inside: Christmas Greetings.