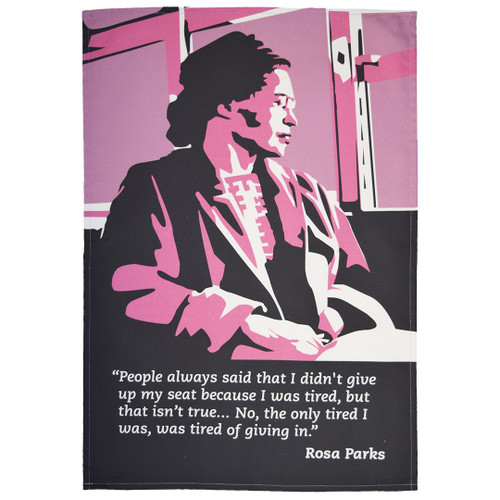 ‘People always say that I didn't give up my seat because I was tired, but that isn't true. I was not tired physically, or no more tired than I usually was at the end of a working day. I was not old, although some people have an image of me as being old then. I was forty-two. No, the only tired I was, was tired of giving in.’

It is a Thursday evening in December 1955, in Montgomery, Alabama. After a long day of work as a seamstress, Rosa Parks boards a city bus to go home. She walks past the first few rows of seats marked ‘Whites Only.’ It is against the law for her, as an African American, to sit in these. She sits in the middle of the bus, where she is permitted to sit as long as no white person is standing. This is a deeply racist, segregated society.

The bus continues along its route, gradually getting more crowded. The driver notices that all the seats in the ‘Whites Only’ section are now taken, and orders the people in Parks’ row to move to the back of the bus, where there are no seats. Reluctantly, they all get up… except Rosa. And just like that, a small act of resistance sparks national protest.

Parks’ refusal to surrender her seat spurred a city-wide boycott, leading the Supreme Court to lift the law requiring segregation on public buses. It also saw the emergence of Martin Luther King Jr as a civil rights activist, and the growth of the wider movement for racial equality. Parks became an international icon, labelled the ‘first lady of civil rights’ and the ‘the mother of the freedom movement.’

Celebrate the iconic woman who made a stand by staying in her seat.