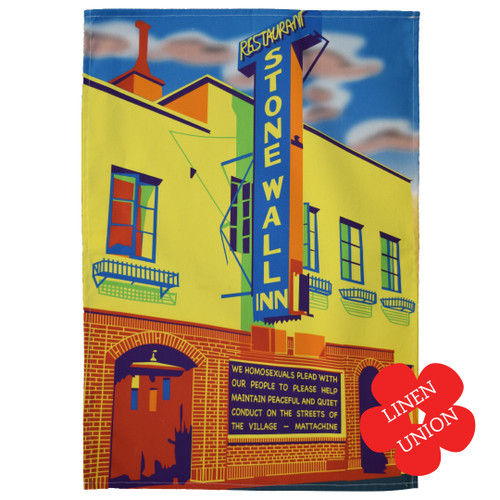 When the police arrived at 1:20 am and expelled the clientele in order to arrest the employees, it was expected that they would quietly hurry home. That’s not what happened. The patrons resisted, protested, and when a woman was forcibly arrested, the protests grew stronger into a full-blown riot. The crowds grew. And not just that day either ­– the Stonewall riot was perhaps the most important event leading to the LGBT rights movements in the US. Within a few years, gay rights organisations were founded across the US and the world. On June 28, 1970, the first gay pride marches took place in the US commemorating the anniversary of the riots. Similar marches were organised in other cities. Today, LGBT Pride events are held annually throughout the world toward the end of June to mark the Stonewall riots, and the Stonewall National Monument was established at the site in 2016.

We’ve designed this tea towel to commemorate the 50-year anniversary of the Stonewall Riots and celebrate the freedom of all to love.