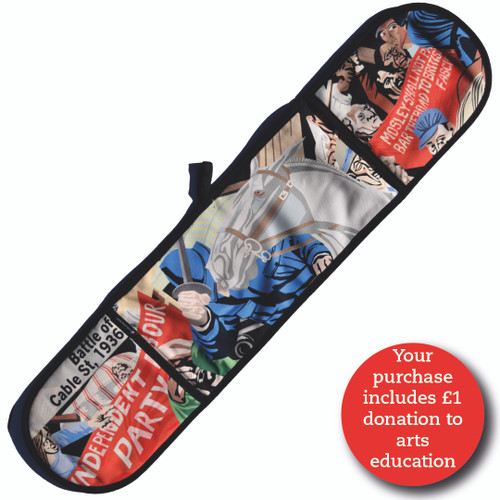 The year was 1936. Fascist leader Oswald Mosley wanted to march his Blackshirt thugs through the heart of East London, then home to a large number of Jewish residents. Despite a petition signed by 100,000 people, who saw the march as a deliberate provocation, the Home Secretary refused to ban it, deploying 7,000 members of the police force to accompany it and protect the marchers.

But the people weren’t having it. On the day of the march, 20,000 anti-fascists took to the streets, determined to prevent the march. They barred the way with road blocks ­– including a bus and a tram ­– wielding makeshift weapons: sticks, rocks, chair legs, rotten vegetables. Children rolled marbles under the hooves of the police horses.

Echoing the Spanish Republicans in the civil war against Franco's fascists that had begun earlier that summer, the protesters chanted the slogan ‘They shall not pass!’ And they didn’t: Mosley eventually turned his fascists away, but the day ended with some 150 counter-protesters arrested and 175 injured.

Fast-forward to today. Reports of hate crime have increased, the far-right is rising across Europe, and a white supremacist rallies have taken place in Europe and the US. The people fight back again. 80 years later, the forces behind the Battle of Cable Street must be remembered. Let this oven glove serve as a reminder of the power of ordinary people against racism and hatred.

The design on this product is an adaptation inspired by the original 1976-1987 Cable Street Mural, itself designed and produced by artists Dave Binnington, Paul Butler, Ray Walker and Desmond Rochford. The work is not an accurate representation of the original mural, as it has been moved and adapted by a third party artist to fit the product format.

Artist Paul Butler is aware of this third party work and we have arranged for £1 from the sale of each item inspired by the mural to go towards Community Interest Company Brooks Arts. Funds raised in this way will be used for supporting arts education events hosted by Paul Butler.