Our Jarrow Crusade tea towel is a beauty (I'm allowed to say so without being arrogant because I wasn't the one who designed it!).

In the top right is a map of England with the route the marchers took in October 1936 from the North East to London. Beneath this, dominating the scene, is a drawing of the march with its banner flying high.

200 jobless men heading south during the Great Depression to demand more attention to unemployment from the Tory government. 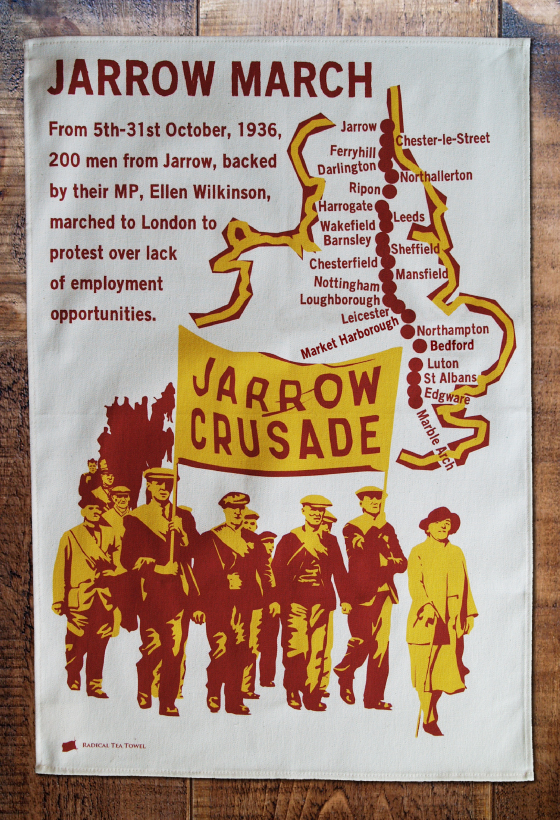 Out at the front of the march you'll see Ellen Wilkinson, the Labour MP for Jarrow, whose birthday we celebrate today.

Wilkinson's steely commitment to democratic socialism (and Mancunian roots) has always marked her out as one of my favourite British socialists of the twentieth century.

That's why when I first saw our Jarrow design I questioned why she didn't have a tea towel all to herself.

We've given Sylvia Pankhurst one after all, and I'd venture that if Ellen Wilkinson had as famous a surname she would be the most recognisable socialist feminist of the early-twentieth century.

But this was naïve of me (if not just plain stupid!).

If you're going to try to capture 'Red Ellen' Wilkinson in one image, of course she's not going to be on her own, in portrait like a crusty monarch.

Hers was a life of collective, working-class action, so is there really a better way to represent her than alongside her comrades in the fight against capitalism's failure during the 1930s?

The Jarrow Crusade remains Wilkinson's best-known campaign, but it is still only one among many in a rich, socialist biography.

She was on the front line of virtually every anti-capitalist, anti-sexist, anti-fascist, and anti-colonial struggle in interwar Britain - organising for the NUWSS in the run up to the Representation of the People Act 1918, support for Irish Independence, support for Indian Independence, the 1926 General Strike, solidarity with Republican Spain, and so on.

Indeed, Wilkinson's life is so full of radical history (despite dying at the tragically young age of 55) that even summarising it would take up way too much of your time.

As such, let me just write you a quick tribute to what I've always thought was her best trait. When Ellen Wilkinson died in 1947, her friend and fellow feminist, Violet Markham, said of her:

"she was small in stature, but there were occasions when she dwarfed her colleagues by the tenacity with which she stood up for the principles she held to be right."

Markham hit the nail on the head - Ellen Wilkinson was blessed with a sturdy compass for what was right - for which causes she should fight.

This was at a time when the same couldn't be said for countless of her fellow Labour politicians.


Ellen Wilkinson's resolute voice for the many

It was the 1920s and 1930s - the era of the Russian Revolution - and a rabid Conservative Party was eager to call 'Soviet agents' anyone who went a bit too left-of-centre (not overly dissimilar to today...)

This environment intimidated a number of Labour MPs, not least the leadership. It drove many away from just causes, fearful of even the slightest Communist associations.

The Jarrow Crusade, for example, and Wilkinson's support for it was criticised by a number of Labour figures because its 'hunger march' style was a form of protest created in the early 1930s by the Communist Party-linked National Unemployed Workers' Union.

Similarly, many Labour politicians were tepid in their support for the Spanish Republic against Franco (Clement Attlee showed a level of solidarity unusual among Labour moderates) because of the Soviet Union's backing of the anti-fascists.

But this kind of political timidity was completely alien to Ellen Wilkinson. 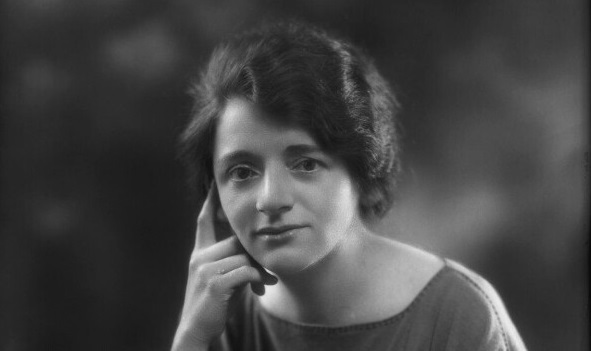 Franco was a fascist and the Spanish Republicans were elected so she was going to support the latter with everything she had, regardless of whether that involved agreeing with and working with Communists.

Jarrow was a bloodied victim of British capitalism, and Ellen Wilkinson would stand side by side with its working class. She didn't care if people called her a 'Bolshevik' or a 'subversive' for doing so.

It's that kind of conviction - an anticipation of Tony Benn's notion that "every political question is a moral question" - that's made Red Ellen Wilkinson an absolute credit to British socialism and the British labour movement.

Wherever she is now, I wish her a happy birthday.