Note from Luke: for today's blog post on UN Human Rights Day, Pete tells the fascinating story of his family's arrival in Britain over 100 years ago and how the establishment of human rights has changed how we think about refugees. Over to Pete!

My Mum's great-grandparents moved to the UK at the turn of the twentieth century.

'Moved' is the wrong verb, actually. It’s too voluntary. They fled.

They were Jews who, for generations, had lived in what is now Lithuania but then was part of the Russian Empire.

In the late-19th century, threatened by revolutionary agitation against economic and political oppression, the Tsar orchestrated and promoted Antisemitism to distract the Russian masses.

The resulting 'pogroms' drove my ancestors, along with tens of thousands of their coreligionists, to jump into the nearest boat they could find and leave Russia as fast as they could.

Most went to either Britain or America. 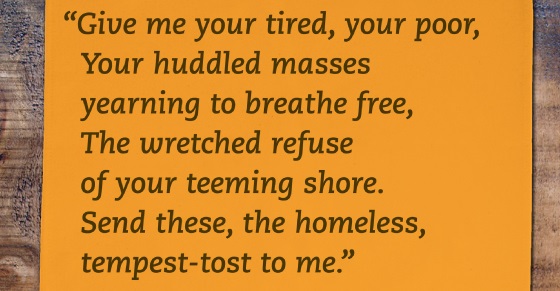 Above: Emma Lazarus quotation on our refugee tea towel, with words from the Statue of Liberty. For every one sold, we give £1 to Refugee Action.


An unwelcome arrival for refugees

My great-grandparents landed in Glasgow. Sadly, they didn't get much of a welcome.

The British governments of the day didn't treat the Jews fleeing Eastern Europe with the kind of solidarity Martin Niemöller later advocated for those less fortunate and more persecuted than ourselves.

My ancestors were funnelled into the worst housing – like the Gorbals, then the slum area of Glasgow.

One obstacle after the other was thrown up in the way of getting citizenship (mum's great-grandparents were formally 'aliens' in Britain for over a decade).

And, in 1905, under pressure from the proto-fascist 'British Brothers League', the government passed the Aliens Act. It was Britain's first ever law limiting immigration and it was designed to keep Russian Jews out, regardless of how much danger they were in.

So why am I telling you this story on Human Rights Day?

If there had been the modern legal infrastructure and language of 'human rights' a hundred years ago, the British government wouldn't have been able to write off my family as 'aliens'. They would have legally been 'refugees', with all the rights that status entails.

In 1951, shadowed by the memory of the Second World War, the United Nations passed its Refugee Convention. It was ratified by 145 states – including Britain – and put on them a duty to protect refugees.

I'm not saying it converted all the Theresa Mays of the world to Emma Lazarus's way of thinking about refugees, but it made it much harder for them to treat those fleeing strife abroad like they used to.

If these rights had come around fifty years earlier, it would have made life for my great-grandparents much easier. That's for sure.

And that's what I’m thinking about on this Human Rights Day. Not so much abstract concepts like 'justice', but all those years of grim housing, of anxiety about deportation, of having to suck up to the powers that be to win citizenship - all of which my forebears could have been spared had 'human rights' been a thing.

Now we do have the concept of human rights – and that's something we can all be thankful for.