For a radical, there are few writers more quotable than  Victor Hugo:

"When dictatorship is a fact, revolution becomes a right."

"Toleration is the best religion."

And, the one we’ve chosen for his radical tea towel:

"Nothing is more powerful than an idea whose time has come."

It’s hardly surprising, then, that the mind behind these fiery words was not content with a life buried in books. 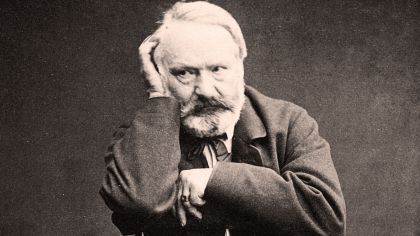 A literary icon and radical hero - click to read more radical history on our blog!

The political life of Victor Hugo

And his was definitely a time for vigorous politics.

Hugo lived through all this, taking political positions every step of the way.

From 1848, for example, he fought a running battle for a democratic republic in France while the forces of reaction sought to restore an autocratic monarchy.

When Louis Napoleon (not to be confused with the all-conquering General and Emperor) overthrew parliamentary democracy in 1851, Hugo declared him a traitor to France and was exiled for his trouble. 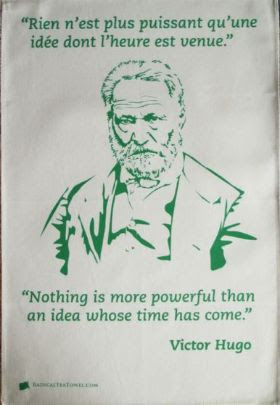 From his exile (much of it spent in Guernsey!), Victor Hugo wrote pamphlet after pamphlet denouncing and ridiculing France’s new dictator.

Hugo was far from consistently radical.

His support for the bloody invasion of Algeria was as barbaric as it was tragically normal in contemporary France.

But he often proved well ahead of the political curve, too.

Hugo was an early and passionate opponent of capital punishment.

During the revolutionary republican government of 1848, as a member of the National Assembly, he had called to his fellow Frenchmen:

"You have overthrown the throne, now overthrow the scaffold."

Hugo made his opposition to capital punishment global, writing to the US government in 1859 to persuade them not to execute the anti-slavery radical, John Brown, following his iconic raid on Harpers Ferry.

When  Victor Hugo died in 1885, more than two million French citizens joined his funeral procession from the Arc de Triomphe to the Pantheon in Paris.

Many were there not only to mourn France’s greatest writer, but to commemorate an activist who’d spent much of his life championing the French poor and French democracy against would-be tyrants.

So along with the likes of Harriet Beecher Stowe, Charles Dickens, and Percy Shelley, Victor Hugo has a place in that band of 19th century authors who, beyond their books, struggled for a better world.

Click to browse our complete collection of radical tea towels