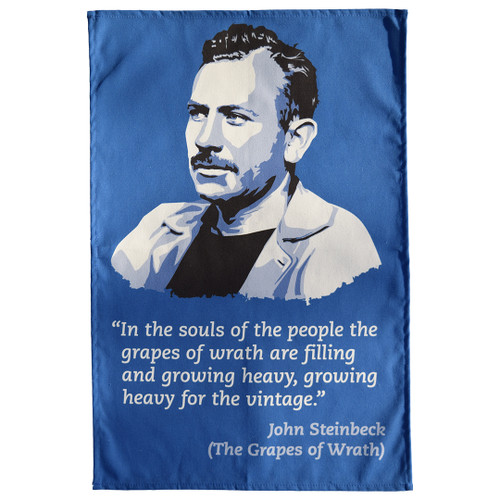 ‘In the souls of the people the grapes of wrath are filling and growing heavy, growing heavy for the vintage.’

The quote on this tea towel comes from The Grapes of Wrath, a novel written by John Steinbeck. Steinbeck was a Nobel Prize-winning American author, praised for his ‘keen social perception’ and speaking out against injustice, poverty and prejudice through his writing. His works frequently featured downtrodden protagonists, commenting on the impact of the Great Depression and the struggles caused by the Dust Bowl, such as in Of Mice and Men and The Grapes of Wrath. Some critics found the latter too critical of capitalism and sympathetic to the workers' plight, but it nonetheless went on to win both the National Book Award and Pulitzer Prize for fiction, becoming one of the defining novels of the 20th century. More than 15 million copies of the novel were sold in the 80 years following its publication, and 50,000 copies are still bought in America every year even now. Steinbeck was later also awarded the American Medal of Freedom in 1964, four years before his death. A literary gift for someone who speaks out for the people!