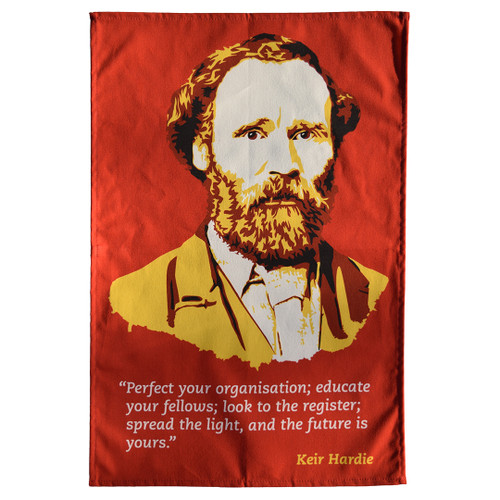 At 8 years old, James Keir Hardie was sent to work at a bakery, as the sole wage-earner of his family. At 11, he was a coal miner. At 17, he had taught himself to read and write. At 44, he was leader of the Labour Party.

Having organised workers’ unions and leading miners’ strikes previously, Hardie was invited to stand as the Independent Labour Party candidate for West Ham in East London in 1892, a seat which he won, making him the first Labour Member of Parliament. Over the next few years, he helped form the Labour Party as it is known today, being elected as its first leader. He was a radical through and through: marked out by parliament in his dress – he wore a tweed suit when most members of parliament wore more formal dress – as well as his support for issues such as women's rights, free schooling, pensions and Indian self-rule.

"Perfect your organisation; educate your fellows; look to the register; spread the light, and the future is yours."

Keir Hardie's words call on Labour Party members to make sure the party is well organised, that the rules are followed and that members understand the policy of the party. The reference to the register is an indirect way of checking that the views of individual electors are being canvassed and their responses recorded on the electoral registers used for "knocking up" Labour voters on election day.