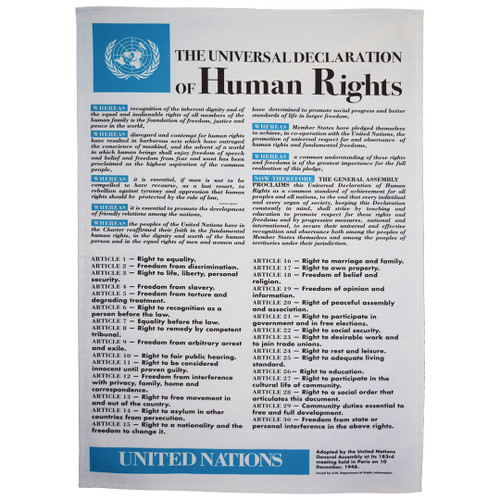 This tea towel echoes the style of the original published Universal Declaration of Human Rights, which was adopted by the United Nations General Assembly in Paris in 1948. The Declaration consists of 30 articles (summarised on this tea towel in the interests of brevity) such as "the right to equality" and "freedom from discrimination". Although they are not considered legally binding, the rights have been incorporated into various international treaties, human rights instruments, and national constitutions. Additionally, some legal experts have argued that because countries have constantly invoked the Declaration for more than 50 years, it has become binding as a part of customary international law. The Declaration was also the first step in the process of formulating the International Bill of Human Rights, which was completed in 1966, and came into force in 1976.