Like me, you may have been distressed to hear that Karl Marx’s resting place in Highgate Cemetery in North London has been vandalised again yesterday for the second time in a few weeks.

It’s a peaceful, leafy-green corner of the world. Near where he spent most of the later part of his life; near the parks where his daughters ‘Jennychen’, Laura, and  Eleanor would have played as kids. Karl shares the grave with their mum, his lifelong friend and love, Jenny von Westphalen.

For a couple who s acrificed their stability and prosperity in order to struggle for a world emancipated from tsars and Kaisers and capitalists, it’s fitting that they managed to find somewhere tranquil to rest their mortal heads.

Tranquil, that is, until the above-mentioned crooks took it upon themselves to desecrate their grave. 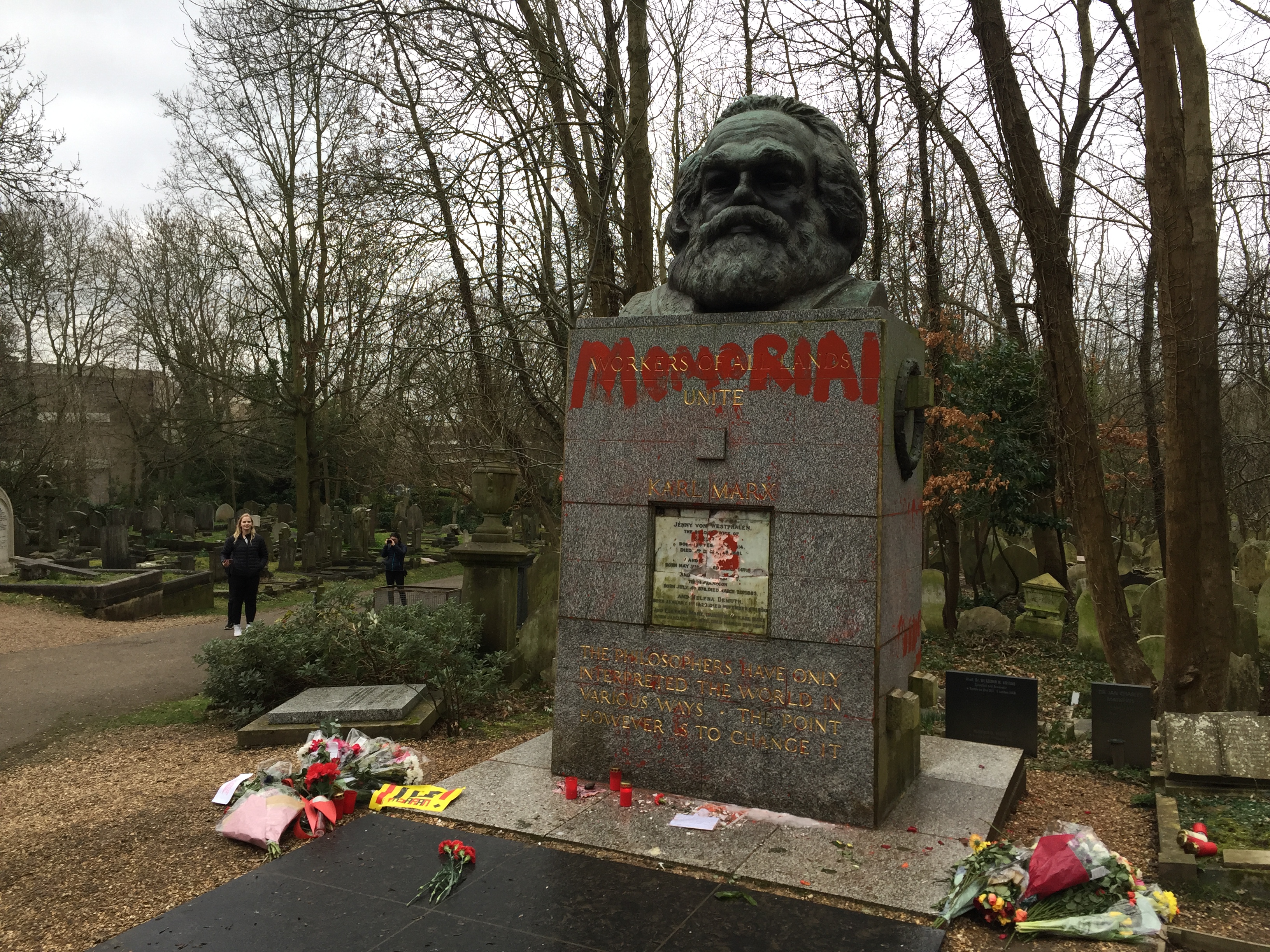 Above: By coincidence, members of the Radical Tea Towel team visited Karl Marx's gravesite yesterday to pay our respects. By then some of the paint used by the vandals - but not all of it - had been washed off.

How to respond to such dastardly behaviour?

The temptation is to reach for  Tony Benn’s quote:

“The Marxist analysis has got nothing to do with what happened in Stalin’s Russia; it’s like blaming Jesus Christ for the Inquisition in Spain.”

The vandals apparently scrawled “memorial to the Bolshevik holocaust” on Karl and Jenny’s tomb in red paint, so Benn’s sound a nd accurate argument would seem to be a fitting response.

To rationally counter-argue is to be too generous to these people – and not only because those who go about vandalising graves have forfeited the right to a debate with us.

And it’s too generous to give this Tony Benn response because it operates on the assum ption that the other side are sincere in the (absurd) belief that Karl was somehow responsible for ‘genocide’.

But I’d wager the people who did this are fully aware of the fact that Karl had absolutely nothing in common with a brute like Josef Stalin (it’s a ridiculous world in which that doesn’t go without saying!).

I bet the reason they did this is precisely because, in truth, Karl Marx’s principal goal throughout his life was human emancipation and the end of tyrants – which is exactly why he continues to inspire hundreds of millions of hopeful, freedom-loving people across the world. 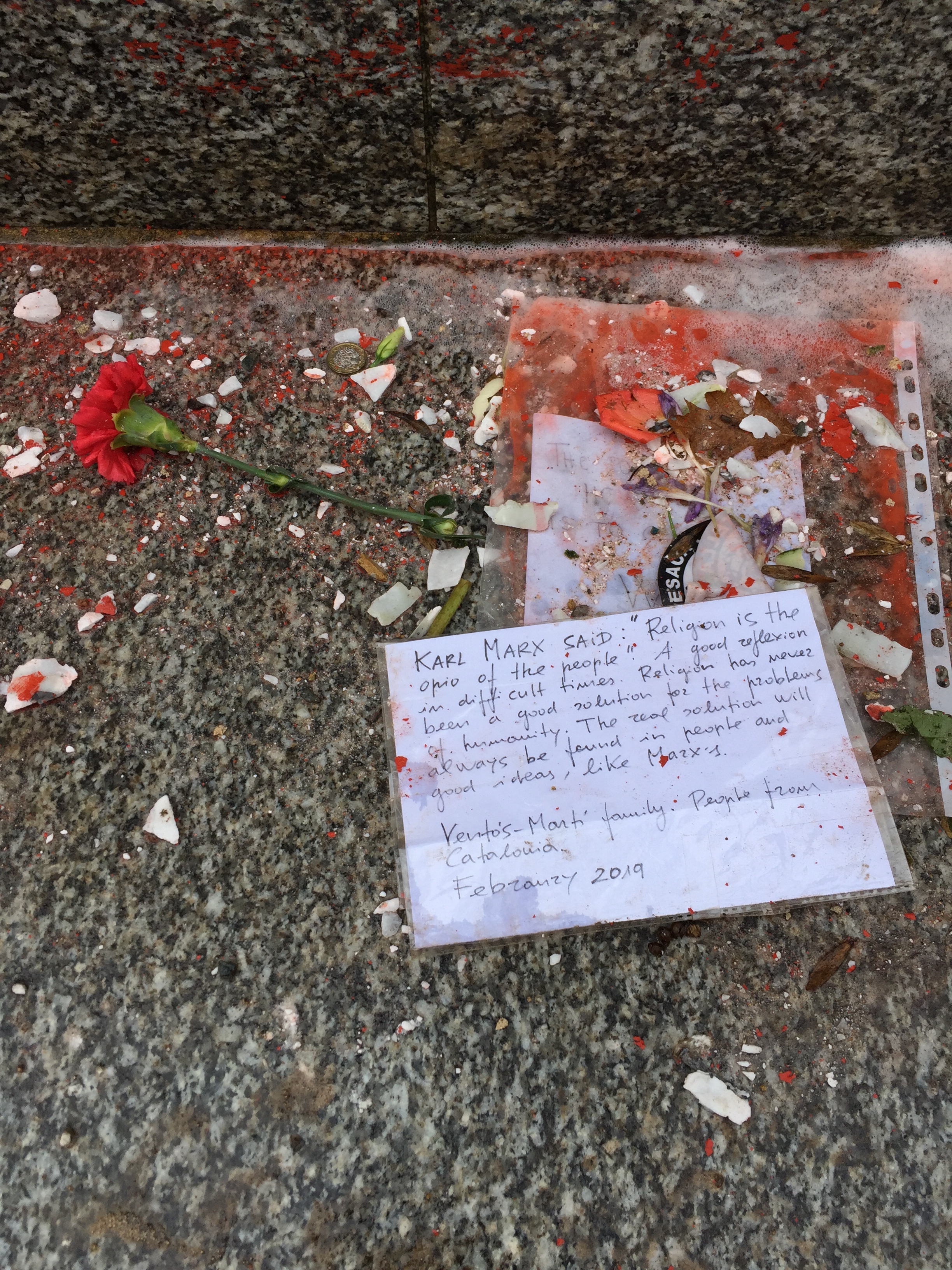 Above: Not all visitors to Marx's tomb bring such nefarious intentions - as seen in this inspiring note left by a family from Spain

Looking forward, the good people who look after Highgate Cemetery will of course roll up their sleeves and clean up the Marxs’ resting place, restoring a bit of peace to that lovely corner of north London.

What’s more, 2019 is going to be a big year for the history of Karl Marx in England.

No doubt this occasion will be an opportunity which many will take to pay their intellectual and political respects to the peerless Karl Marx.


An ode to Marx's ideology

But for now, let me finish with a few of the many reasons why I personally owe Karl Marx my thanks:

1. First and foremost, it must be said that few of the inspiring characters and historical events we depict at Radical Tea Towel - from the Jarrow Crusade and the Battle of Cable St to Che Guevara and Nelson Mandela - would have turned out as they did were it not for the influence of Karl Marx’s thought.

2. Second, as an ordinary citizen, my family and I continue to benefit everyday from social services, economic rights, and political movements which would not have come into being if not for how Marx completely ruptured people’s sense that capitalism was something to be accepted without objection.

3. Finally, as someone who shares in the widespread objection to widening income disparities and economic exploitation throughout the world, I am taken by how Marx's example inspires us all to keep going and seek justice in our own time, even as we deal with similar stru ctures of power and inequality as those confronted by Marx and his contemporaries.

To quote those inspiring words from Marx which are inscribed on the bottom of his tomb:

“The philosophers have only interpreted the world in various ways. The point, however, is to change it.”