Rosa Luxemburg, the Polish-born socialist, once said that "Those who do not move do not notice their chains."

The fact that Luxemburg was Jewish at a time when antisemitism was virulent in central Europe added to her sense of injustice.

Another Rosa - Rosa Parks - happened to be African American in Alabama at a time when white supremacism was virulent in the southern states. Again, not an easy place to be.

But on 1st December 1955, Rosa Parks decided to do something about it. What she did was right out of the Luxemburg playbook. 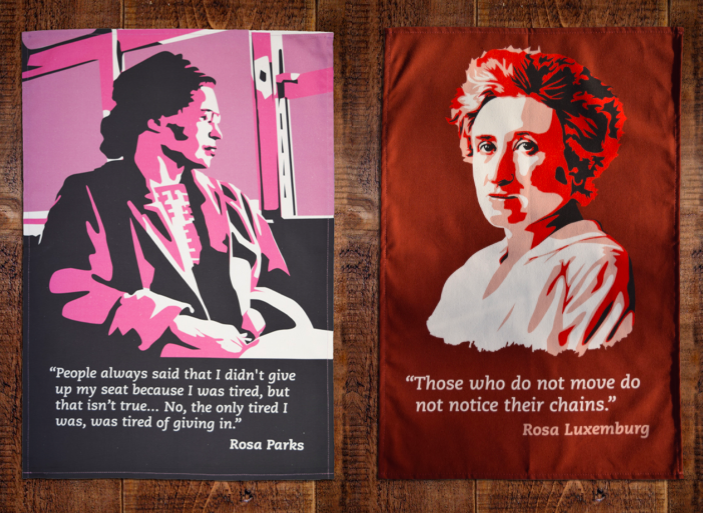 When she sat at the front of the 'colored' section of her bus in the city of Montgomery, Rosa and three other African Americans were told by the bus driver to vacate their seats because the white section of the bus had filled up and spaces were needed.

The three others complied, but Rosa Parks refused. She noticed her chains.

Parks was arrested and charged. End of the story? Not by a long shot.

Within a few days, on the 5th December, various African American community groups, hearing about Parks's experience, had launched a boycott of all bus services in Montgomery. 40,000 took part, presenting a real challenge to the segregationist authorities.

This mass action lasted for a year.


A national movement against segregation

Alabama, the heart of the old Confederacy (which had supposedly been defeated a century before in the Civil War), rang to the sound of thousands of the oppressed, moving and noticing their chains.

People started to ask what was going on down in Montgomery. Over 100 journalists, national and international, came to the city to report on the boycott.

Up in Washington DC, the White House was getting embarrassed. With the Cold War gathering pace, how could America preach to the rest of the world about US freedom as opposed to Soviet tyranny when thousands of its own citizens were actively protesting against racial apartheid at home?

So, when Rosa Parks's legal case against the city of Montgomery at last reached Washington, I'm sure that President Eisenhower was quietly happy to see the Supreme Court rule against not only her arrest, but any law requiring racial segregation.

The judges said segregation laws violated the 14th amendment of the US Constitution promising equal rights to all races.

That 1868 amendment had been passed a full 87 years before Rosa Parks refused to leave her seat.

The struggle had been long to see the Constitution's words become a reality in the South. And it wouldn't end with the Montgomery boycott.


Parks was just the beginning

For months after the Supreme Court ordered integration in Alabama, the Ku Klux Klan waged a terrorist campaign against the city's black population. Buses were fired on with rifles. Churches were bombed and assassination attempts were made on civil rights activists.

The post-war struggle for racial equality in the US had only begun in Montgomery, it wasn't won there.

There would be hard times to come. But thankfully, the struggle in Alabama produced some of the men and women who would continue to lead the civil rights movement.

I think now of one in particular. Right at the start of the boycott, he was elected President of its organising body, the Montgomery Improvement Association.

Maybe you've heard of him? He was a 26 year-old Baptist pastor named Martin Luther King Jr.