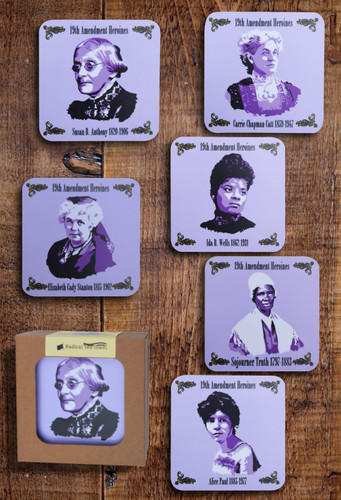 It was what gave women the right to vote in the United States:

"The right of citizens of the United States to vote shall not be denied or abridged by the United States or by any State on account of sex. Congress shall have power to enforce this article by appropriate legislation." Thus runs the 19th Amendment to the US Constitution, passed by the House of Representatives and the Senate in 1919.

It shouldn't be forgotten, of course, that in many parts of the US, black women (and men for that matter) still had a long way to go before they would be allowed to vote without hindrance.

The 19th Amendment was a start in the process of enfranchisement, however. And some of the brave souls and pioneers whose fearless campaigning led up to this epoch-making advance are celebrated in our 19th Amendment Heroines set of 6 coasters.

- Susan B Anthony who put her constitutional amendment before Congress.

- Carrie Chapman Catt who was the founder of the League of Women Voters and the International Alliance of Women.

- Elizabeth Cady Stanton who presented her 'Declaration of Sentiments' at the 1848 Seneca Falls Convention.

- Journalist and public speaker Ida B. Wells who campaigned for civil rights as well as women's suffrage.

- Sojourner Truth who was the first African American woman to win a court case rescuing her child from slavery.

- Alice Paul who caught the women's suffrage campaigning bug in England before returning to the US.

Set of 6 coasters in a natural card presentation box. Coasters are full colour printed melamine, heat resistant to 145 degrees centigrade as well as being scratch & stain resistant. Coasters measure 95mm square & have a hardboard base and durable cork backing. Ethically made in the UK.