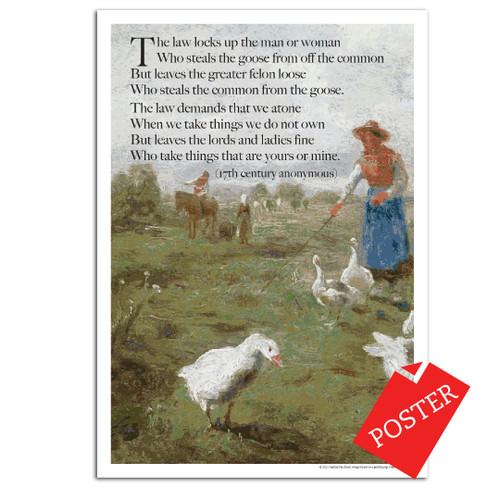 The Goose and the Common was a protest rhyme probably first coined at the end  the 17th century. It rails against the process of enclosure, whereby land which had been traditionally farmed by peasants or grazed by their livestock was enclosed for the use of the landed gentry who technically held the deeds. It thereby ceased to be land for communal use and was often made into private pasture or hunting grounds. As a consequence, vast numbers of poor were deprived of a means of feeding themselves and  there was steady depopulation of the countryside.

The backdrop on this poster is from a painting by a 19th century Italian artist, Antonio Montemezzo.

A2 sized, portrait style poster (594mm deep x 420mm wide) made with 200gsm Silk FSC Mixed Credit FSC paper. The Forest Stewardship Council is your assurance that the product is made with, or contains, wood that comes from FSC certified forests or from post-consumer waste. Digitally printed.