102 years ago today, while the Great War was burning the world down, a few hundred Irish men and women struck out for independence after 800 years of English rule.

In what we now call the Easter Rising, soldiers of the nationalist Irish Volunteers and socialist Irish Citizens Army seized key points around Dublin, most famously the General Post Office (GPO) on O'Connell Street.

In response, Britain sent in troops, and after a week of poorly prepared resistance, the Irish rebels were overcome.

With the situation under control, the British Army decided to do the stupidest thing possible.

They executed the leaders of the Rising. 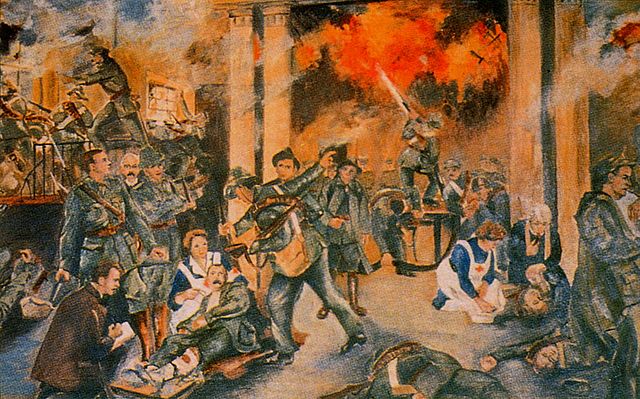 Walter Paget illustration, 'Birth of the Irish Republic', depicting the fighting outside the General Post Office


A rise in public support for independence

All the signatories of the Irish Proclamation of Independence - which had been read from outside the GPO on the first day of the rising - were murdered by firing squads in Dublin's Kilmainham Jail.

They might as well have shot the concept of British rule over Ireland while they were at it.

Among the executed rebels were popular and charismatic Irish politicians. Men like Seán Mac Diarmada, a passionate supporter of Gaelic cultural revival against forced Anglicisation, and James Connolly, the hero of the Irish labour movement.

Though a huge majority of Irish people had been behind Home Rule before the Rising, many had been hesitant to support the armed action of the Rebels – it was often felt they had acted too rashly, and many held them responsible for the destruction Dublin had suffered during the battle.

But the executions changed all this. To see respected Irish figures murdered in cold blood by the British Army set the country's politics ablaze.


Turning the tides to home rule

Enlistment in the Irish Volunteers - soon to be reorganised as the Irish Republican Army (IRA) - rocketed, and in the 1918 General Election Sinn Fein effectively wiped out the far more conservative Irish Parliamentary Party. (It was in this election that, as a Sinn Fein candidate, Constance Markievicz – a veteran of the Easter Rising – became the first ever woman elected to Parliament.)

By 1919, Sinn Fein and the IRA were waging a full-scale war of independence against Britain with the overwhelming support of the Irish people. Despite brutal measures - not least the civilian-murdering, atrocity-perpetrating 'Black and Tans' paramilitary units - the British Empire was unable to subdue little Ireland.

In 1921, Britain threw in the towel and gave the south of Ireland its independence - something truly unthinkable right up to the moment the leaders of the Easter Rising were murdered five years earlier in Kilmainham Jail.