Have you ever wondered why aprons were invented? Deriving from the French word ‘naperon’, meaning a small table cloth, aprons have been symbolic of different things throughout history. In ancient times, the apron was worn for practical, decorative, and ritualistic purposes. Nowadays, they might be used to protect clothes or as a fashion statement.

Aprons have also been viewed through the lens of sexism. After the Second World War, the stereotypical image of women was wearing an apron and looking after the house, which is what you’d often see in adverts for household goods and cleaning products. This was later criticised for suggesting a woman’s only ambition should be to stay at home and any kind of professional dreams were out of the question.

Yet times have moved on significantly since those adverts. While we have by no means reached equality, more is now possible and acceptable for both sexes. So now it’s time for everyone to embrace the apron! Take it back to its roots, when it was thought of as a symbol of generosity and hospitality. Cook a meal together as a family and ensure everyone, parents and children alike, have an apron to protect their clothes. 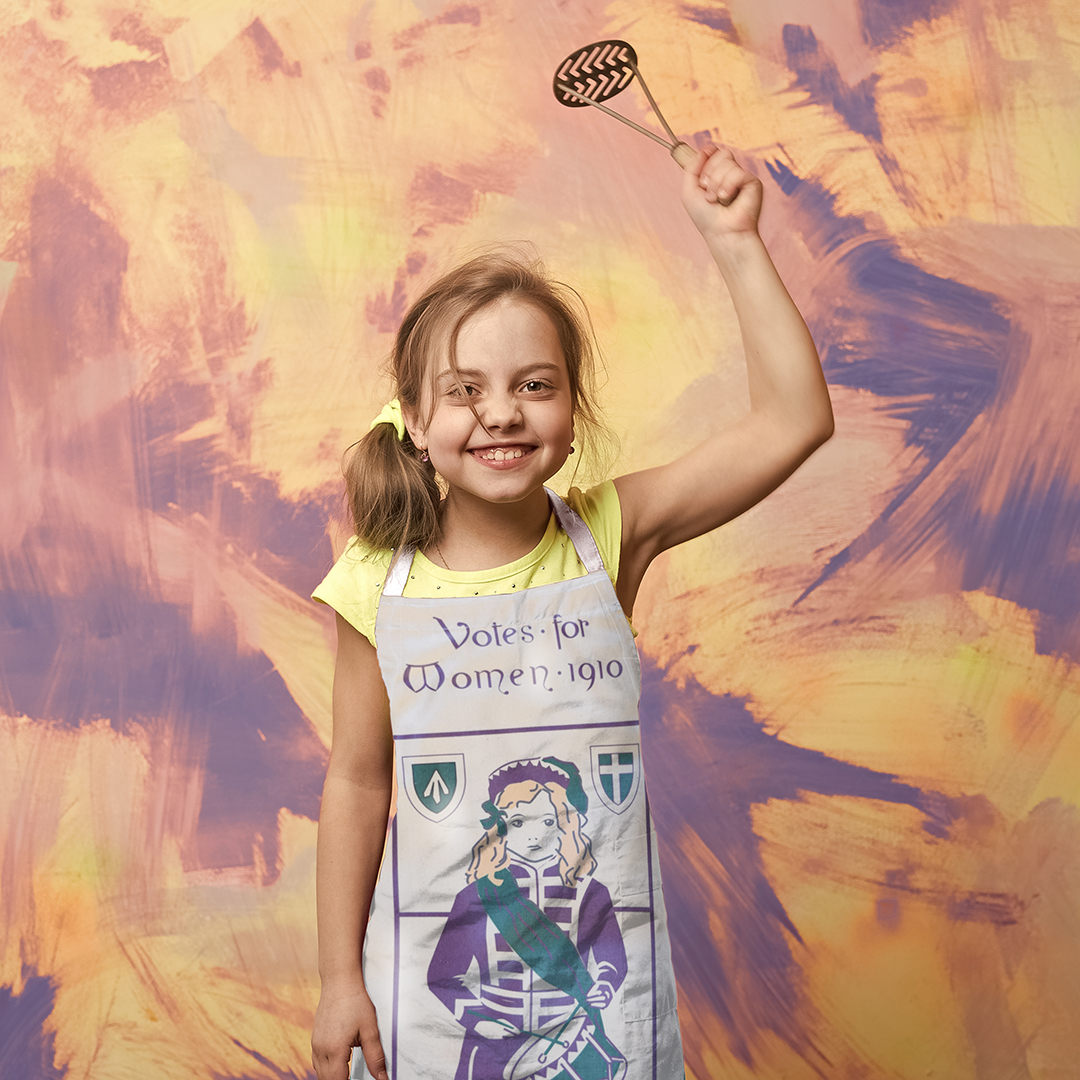 Above: don't mess with my Suffragette Drummer Girl apron!

The history of the apron

Aprons have a fascinating history, both in relation to the people who have worn them and symbols they have represented.

There is some evidence that early historical figures used aprons. The Bronze Age Minoan civilisation of ancient Crete had a fertility goddess which is said to have worn one. Ancient Egyptian pharaohs and Assyrian priests are also thought to have had aprons.

It was the Middle Ages when the apron first became a domestic symbol, and was associated mostly with homemakers, workers, and also artists. Certain trades started wearing distinctive aprons to showcase their profession. Bakers had the checkered ones while cobblers chose black ones to prevent the black wax they used on shoes from ruining their clothes.

Aprons were first considered fashion items in the 16th century but in the years following they symbolised an array of ideas. This included a cultural icon, a symbol of entrapment and sexism, and a stylish accessory which promotes health and nutrition.

After the Second World War, the apron represented an intact family: something everyone was yearning for. Yet it quickly came to symbolise the domestic goddess and stay-at-home mum, which those fighting for equality lashed out against.

In modern times the apron is a fashion item, an expression of personality, a representation of healthy eating, and a vintage buy. Both expensive fashion boutiques and cheap online stores are selling them. It looks like the apron isn’t on its way out any time soon.


What different types of apron are there?

Firstly, there’s the half apron, which is the one that goes from the waist usually to the mid-thigh but it can also be longer.

A full or ‘bib’ apron is the most popular and common type. It covers the chest and loops or ties at the back then ties at the waist, just like these  radical aprons.

Slip on aprons are far less likely to be seen in a kitchen. They’re the ones that look a bit like hospital gowns.

Little did you know, a pinafore was originally a type of apron. They differed from the more traditional apron by including more fabric over the shoulders than their counterparts. Pinafores were also traditionally worn by young girls as a practical yet smart piece of clothing.


What’s an apron made of?

Before buying an apron you not only need to choose its style and design, you have to decide what you want it to be made from.

The most common material used to make aprons is cotton or muslin. This is usually what people opt for in cooking aprons.

There’s also the rubber or nylon apron. These tend to be used more in industrial work as they’re better for situations when the wearer might get wet or even if they are using harmful substances.

Leather can sometimes be a popular fabric for aprons as it’s very durable and long-lasting.


Why should you wear an apron?

Many people think that wearing an apron is just a ‘nice to have’ accessory which might be useful in keeping your clothes from getting dirty.

This is certainly one use for them, and an important use since it could actually prevent clothes from getting completely ruined by impossible-to-remove stains like red wine and chocolate.

However, you should also wear an apron for health and hygiene reasons.

By the time you cook dinner in the evening, your clothes have probably been in contact with the outside world at some point. This means they’re likely to have a lot of germs on them, especially if you travel to and from work on public transport.

Wearing an apron prevents your food coming into contact with the dust, dirt, hair, germs and whatever else might have been floating around you throughout your day.

Finally, wearing an apron allows you to make a statement to those around you while you’re cooking. Whether you want to remember the  Suffragettes or love William Morris’s design and activist work, you can show off your personality in the apron you choose. 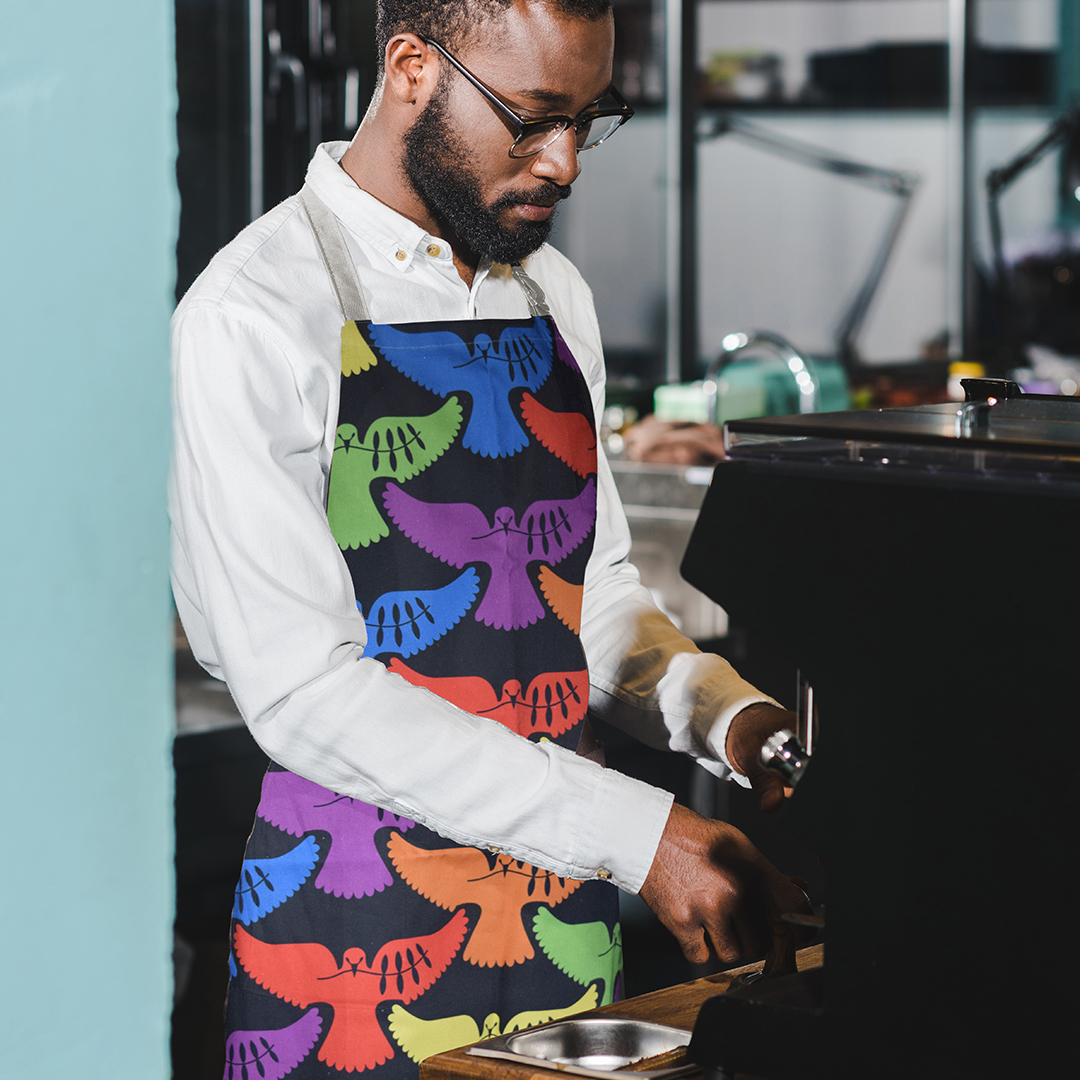 Who should wear aprons?

The simple answer is everyone! While aprons have been worn by many different groups of people throughout history, there’s no one group that the apron should be assigned to nowadays.

With more and more couples sharing the balance of staying at home to care for children, now is a better time than ever for all members of the family to have their own apron. Even if you’ve never considered it before, an apron could be a thoughtful Father’s Day gift for Dad, a stocking filler for your child, or the perfect birthday present for your friend.