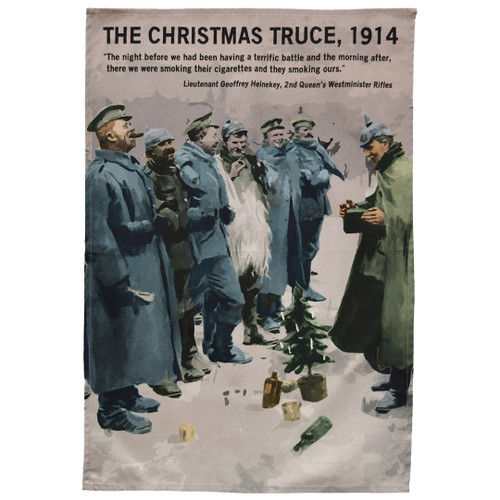 It is commonly thought that the First World War (or "The Great War" as it was known before the second came along) was expected to be "over by Christmas". The war had started in July 1914 and the idea of such a short duration may have been encouraged by Germany in order to incentivise the troops.

Anyway, five months later Christmas came around, yet the misery and bloodshed were grinding on. Desperate for a respite, by mutual consent troops on both sides of the Western Front strayed into no-man’s-land to exchange Christmas greetings and good cheer (even though this was frowned on by their superiors). Some played impromptu games of football. Others used the cease-fire to bury their dead. Very soon hostilities resumed. There were sporadic attempts to revive the spirit of the truce over subsequent Christmases but that initial moment of concord and hope was never to be repeated.

This image is based on an artist's imagining of the scene, published in the Illustrated London News in January 1915. The Great War was supposed to be the one that would end all wars. It didn't happen - but the Christmas Truce is a reminder that hope springs eternal.