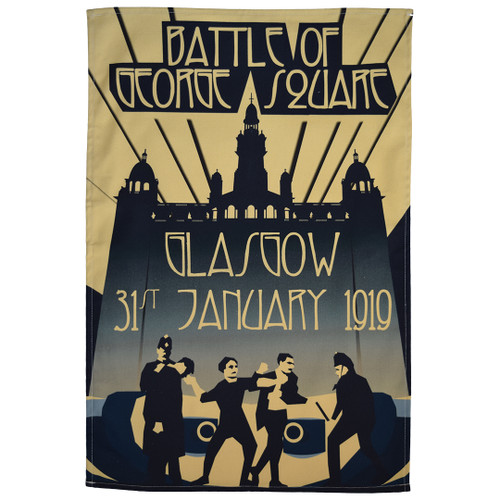 The Battle of George Square was a violent confrontation in Glasgow, between Glasgow City Police and striking Glasgow workers concerned at the reduction in their working hours. After the end of WW1 the Scottish TUC and Clyde Workers' Committee (CWC) had sought to increase the availability of jobs open to demobilised soldiers by reducing the working week from a newly-agreed 47 hours to 40 hours, resulting in Scotland's most widespread strike since 1820.  On 31 January, 82 days after the end of WW1, up to 25,000 strikers congregated in George Square. The ensuing 'battle', came to be known as "Bloody Friday" or "Black Friday". During the riot, the Sheriff of Lanarkshire called for military aid, and British troops, supported by six tanks, were moved to key points in the city. The strike leaders were arrested for inciting the riot. Although it is often stated that there were no fatalities, one police constable died several months later from injuries received during the rioting. Following the military deployment calm returned to the city and the strikers gave up their cause for a 40-hour work week and therefore, accepted the previously agreed 47 hours.