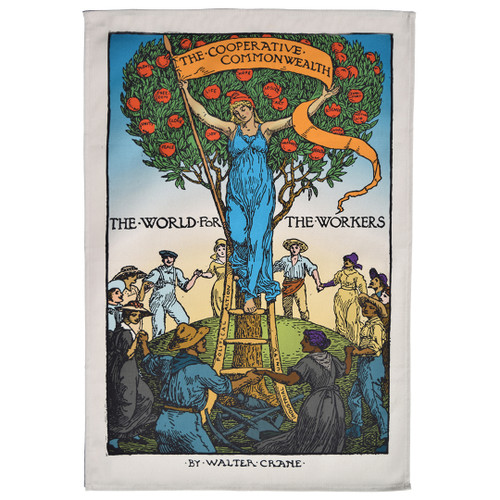 For the English artist and book illustrator Walter Crane, art ‘was at once creative and adaptive, capable of lifting men's thoughts on to the loftiest plane.’ And that’s what he used it to do.

The first half of his career was dedicated to inspiring children through his illustrations of toy books. He is considered to be the most influential children’s book creators of his generation, substantially helping to raise the standards of book illustration. The second half of his career was dedicated to him using his art to inspire workers. He became interested in liberal politics in the 1860s and in 1884, he joined the Social Democratic Federation. A didactic element began to underlie much of his work, with him contributing weekly illustrations for the socialist periodicals Justice and The Commonwealth, as well as producing annual illustrations celebrating May Day for the magazine The Clarion. These continued to be much reproduced after his death; the one featured on this radical tea towel was incorporated into a poster as late as 1926.

If art had such power over thought, Walter wrote, then socialists, ‘who desire to build up a larger and fuller human life, based upon collective ownership of the means of material existence in a co-operative commonwealth, cannot afford to leave Art out of account.’ We hope the art on this socialist gift continues to inspire you too!