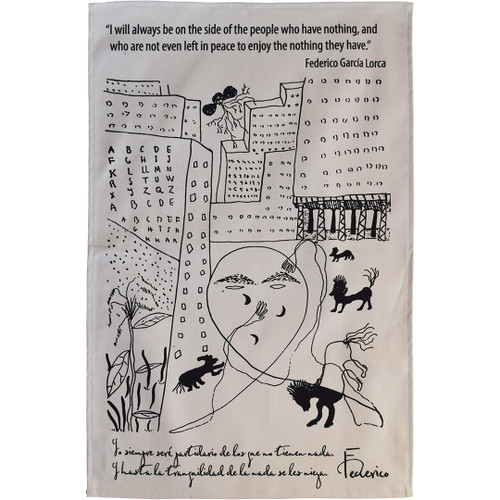 "I will always be on the side of people who have nothing and who are not even left in peace to enjoy the nothing they have." / "Yo siempre seré partidario de los que no tienen nada, y hasta la tranquilidad de la nada se les niega."

So declared, Federico García Lorca (1898-1936) a Spanish theatre director, poet and playwright - arguably the most important Spanish writer of the 20th century. His works are full of melancholy and tragedy. The folklore and Gypsy culture of his native Andalusia provided much of his inspiration and subject matter, as did love, Flamenco and mortality.

His best-known plays today are his trilogy 'Blood Wedding', 'Yerma' & 'The House of Bernarda Alba', which all rebelled against the norms of bourgeois Spanish society, challenged the accepted role of women in society and explored taboo issues of homoeroticism and class. Among his most well known poetry are 'Poet in New York', 'Gypsy Ballads' and 'Lament for Ignacio Sánchez Mejías'.

Lorca was also a talented musician and artist. The design on this tea towel is based on a one of his drawings 'Self portrait in New York, 1929'.

Lorca was murdered by Nationalist forces at the beginning of the Spanish Civil War, probably on 19 August 1936. There is some controversy about the motives and details of Garcia Lorca's murder but it was likely a combination of his outspoken socialist views and his sexual orientation. His remains have never been found.