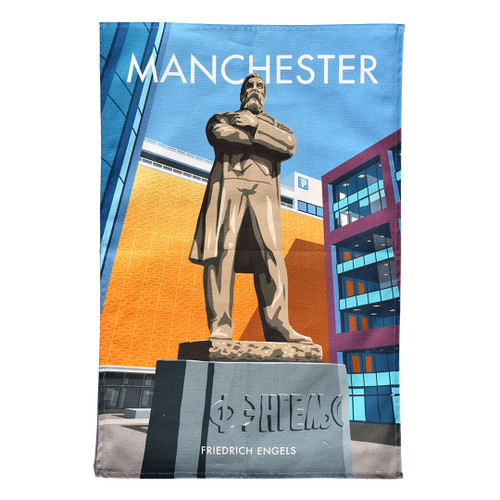 Friedrich Engels is best known along with Karl Marx as the founder of modern communism and co-author of The Communist Manifesto (1848). He spent two decades in Manchester from 1842 and became quickly involved with radical publishing and journalism, and with the British Labour and Chartist movements. The horrific conditions he observed, endured by men, women and children in this city at the heart of industrial Europe, honed his revolutionary philosophy and helped forge works such as The Condition of the Working Class in England.

But the city has never commemorated him – until recently. In summer 2017 the British-born artist Phil Collins transported a 3.5 metre statue of Friedrich Engels, found in two pieces in a village in eastern Ukraine, through Europe to Britain on a flat-bed truck, to be restored and placed in Tony Wilson Place in Central Manchester, now its permanent home.

If Manchester is a meeting point of capitalism and resistance to capitalism - as its history of Chartism, the Suffragettes, the 1842 General Strike and the birth of the Vegetarian Society suggest - then it is high time its memorials, street names and statues reflected that. So now Manchester can finally celebrate its part in the birth and growth of socialism and communism with this soviet era original.

This stunning design is by artist Stephen Millership.