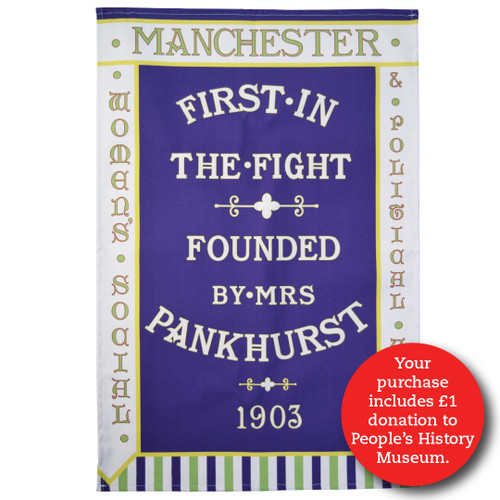 Today, women walk through the houses of Parliament, voted for by the public, by men and women with equal political rights. But it wasn’t an easy journey to get here, and it was one that started a little further up north, more than a century ago, in the city of Manchester. This industrial city was the birthplace of the suffragettes, claiming that legacy when Emmeline Pankhurst and five other women first established the Women's Social and Political Union on 10 October 1903 at her home in Manchester. They aimed to wage a militant campaign for women's suffrage, frustrated as they were with the cautious approach of the National Union of Women's Suffrage Societies.

This tea towel is based on a historical banner used by the Manchester branch of the WSPU; surviving banners like this from the time are extremely rare, and the original is now in the care of the People's History Museum, Manchester. Discovered in a charity shop in Leeds, where it had been for over ten years, it recently became a part of the museum’s collection and it is recognised as one of the nation’s most important suffragette banners. The banner provided the backdrop for some of Emmeline Pankhurst’s most famous speeches, including a rally in Manchester’s Heaton Park on 19 July 1908, when she spoke to a crowd of 50,000 people. Embroidered with the legend ‘Manchester – First in the Fight’, it was a powerful reminder in its day about where the suffragette movement began. Bring a bit of suffragette history into your kitchen with this feminist gift!

£1 of every purchase of this tea towel will go towards the work by the People's History Museum to maintain the original banner.