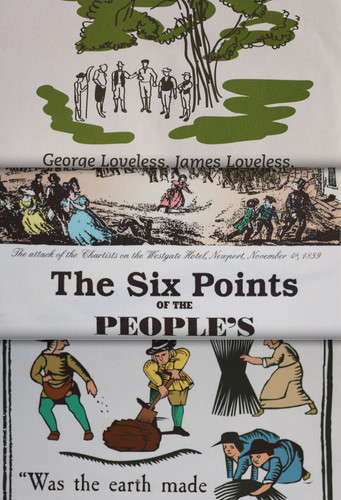 Tea towel 1: The Tolpuddle Martyrs were six farm labourers from the village of Tolpuddle, Dorset, who in 1834 formed a friendly society (or union) to oppose worsening pay conditions, and swore a secret oath of solidarity. Trade unions were legal, but their activities were heavily restricted. Fearing trouble, the local landowner took them to court and they were convicted on the technicality of swearing a secret oath and sentenced to transportation to Australia for a period of seven years. Their supporters in Britain held protests and drew up a petition which collected 800,000 signatures, leading to their release after three years and their return home as heroes. The affair eventually led to greater trade union rights.

Tea towel 2: Chartism was the campaign for greater democracy at the beginning of the 19th century. At the time only men of property could vote, voting was done publicly, constituencies were of hugely unequal size, and elections were held rarely. The movement took its name from the People's Charter of 1838, printed on this tea towel. Among the six demands were a vote for every man (women had to wait for another century before they got a look-in!), equally sized constituencies, no property qualification for members of Parliament and a salary (to allow working men to stand). The engraving reproduced on this tea towel shows the Newport Rising of 1839 when Chartists stormed the Westgate Hotel in Newport, South Wales, where some of their supporters were being held by troops. Twenty people were killed and many wounded. It was not until 1867 that urban men got the vote and 1918 before there was full male suffrage.

Tea towel 3: The True Levellers, or ‘Diggers’ were the most radical of the movements for change that arose in the aftermath of the English Civil War in the 17th century. Whereas other groups sought degrees of political reform or religious freedom, these called for the overthrow of the monarchy and the abolition of private property rights in favour of the communal ownership of land. They even put their ideas into practice, establishing farming communes on common land and tearing down enclosures. The tea towel in this collection features a quotation by Gerrard Winstanley, the founder of the True Levellers: "Was the Earth made to preserve a few covetous, proud men to live at ease; or was it made to preserve all her children?’

Cost of these three tea towels when bought separately: £39.

Half Panama unbleached cotton (heavy weight, textured finish). Stitched on all four sides. Includes hanging loop. Measures approximately 48cm x 75cm. Machine wash at 40 degrees max. We recommend that before you use your tea towel for the first time you wash it at least once to soften up the material and make it more absorbent for drying dishes. Please note size can vary slightly.