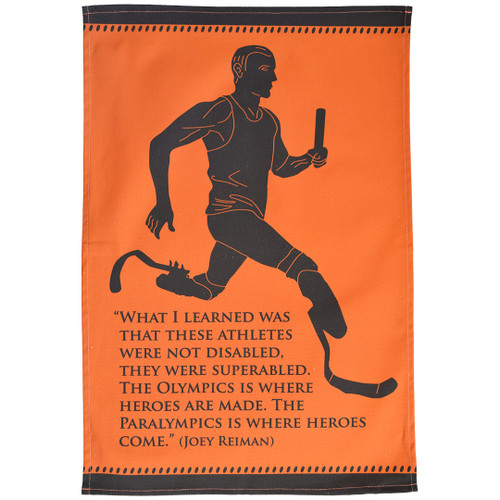 The tea towel design is inspired by Black-figure pottery, a type of Greek pottery that originated in Corinth around 700 BCE and continued to be popular until the advent of red-figure pottery in around 530 BCE.

The ancient Games were staged in Olympia, Greece, from 776 BC through 393 AD, and the first modern Olympics were held in Athens, Greece, in 1896. But it wasn't until after World War II that Paralympics were first introduced, with the hope of rehabilitating injured veterans and civilians. The first official Paralympic Games took place in Rome, Italy, in 1960.

Joey Reiman is an American advertising businessman and author. Following a car accident in Italy he was partially paralysed and lost the use of his right arm. Six months after his accident, Reiman entered the world of advertising and took over the advertising campaign for the Atlanta 1996 Paralympic Games. He was tasked with creating a campaign that would explain the Paralympics and its competitors to a US audience with no prior awareness of the Games and a predominant misunderstanding of disability.

Reiman always considered the campaign for the 1996 Paralympic Movement to be one of his proudest achievements.