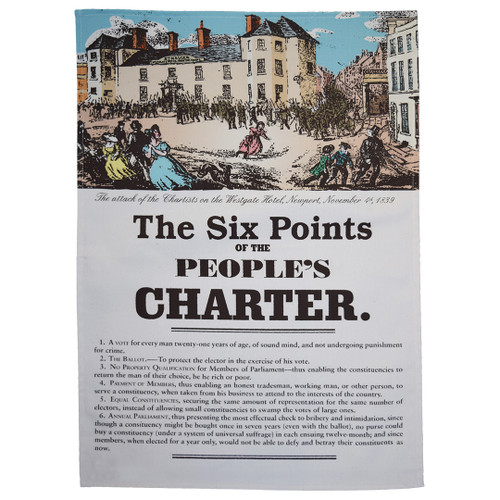 Before women got the vote, men had to get it. In 1832, the Reform Act gave voting rights to the property-owning men in Britain, but the poor remained excluded. Many people wanted to go one step further, demanding universal male suffrage. These demands emerged in 1838 in the form of Chartism, a working class-movement which got its name from the People’s Charter, featured here on this tea towel. In its six main aims, it called for more equality and transparency in the electoral system, and the first four of these goals were eventually achieved.

It wasn’t an easy battle though, despite mass support and petitions which received millions of signatures, their demands were consistently rejected by parliament. The illustration on this historical gift shows such demands in action, depicting the Chartist storming of the Westgate Hotel in Newport ­– probably the last large-scale armed rebellion in mainland Britain. Some 10,000 chartists with rudimentary weapons marched on the hotel, intent on freeing fellow Chartists who had been taken prisoner. Chartism? It’s got our vote.

We’ve got more on the Chartist’s fight for democracy in our blog post here!