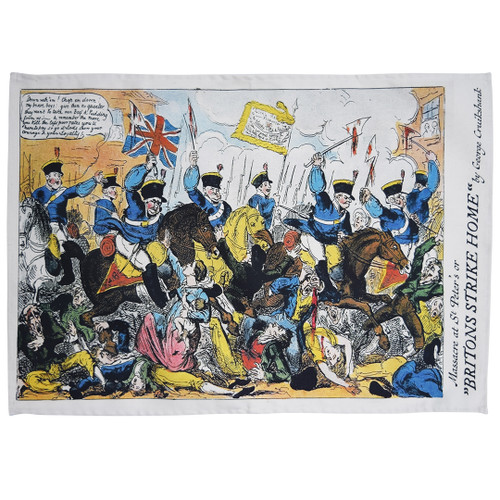 ‘Down with 'em! Chop em down my brave boys... Remember the more you kill the less poor rates you'll have to pay,’ the text on this tea towel reads, the reality in 1819 Manchester echoed.

On the morning of 16th August 1819, 70,000 gathered in St Peter's Fields, Manchester – half the population of the city. It was a peaceful rally to call for political reform: the crowds were in their Sunday best, displaying freshly painted signs, families had come with their children. So how did it become the bloodiest political clash in British history? Troops were sent in to disperse the crowds, armed with swords, leaving 18 dead in their path and more than 650 injured. It was a massacre, a horror felt across the country.

It was also a turning point in British democracy. Named the Peterloo Massacre (recalling the Battle of Waterloo), the infamous clash became a symbol of the struggle for democracy against state suppression and the fight of ordinary people for civil rights. Although it did not lead directly to parliamentary reform at the time, it left a mark on politics and political action, eventually leading to fairer suffrage. We remember it today as a reminder of our ongoing responsibility to stand up for democracy against tyranny.