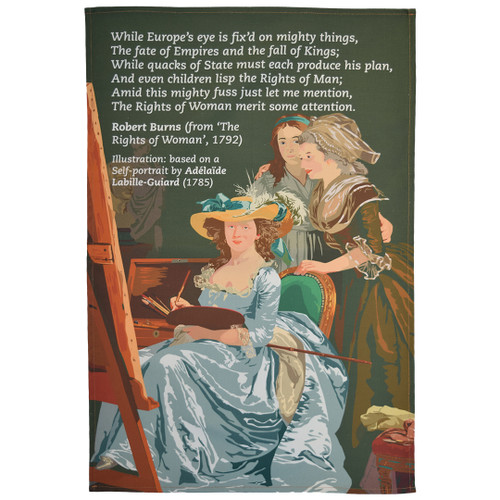 While Europe's eye is fix'd on mighty things,

The fate of Empires and the fall of Kings;

While quacks of State must each produce his plan,

And even children lisp the Rights of Man;

Amid this mighty fuss just let me mention,

The Rights of Woman merit some attention.’

The Scottish Bard? Born a farmer’s son, Robert Burns’ life growing up among the ordinary people of Scotland meant he could write about nature and hardship as well as love and family. He could speak to the common people with his writing, and he did so in way that continues to resonate today. Burns is generally considered Scotland's national poet, his face featured on banknotes and a national day held in his honour on the 25th of January each year. And at New Year all over the world, his poem 'Auld Lang Syne', a sincere expression of friendship is sung passionately.

Burns always sided with the common folk, using humour and small subjects to express big ideas, often inspiring others on the way. His legacy travelled across oceans and centuries, with a line in his poem ‘To a mouse’ giving the title to John Steinbeck’s Of Mice and Men, and his song Comin' thro' the Rye referenced in JD Salinger’s Catcher in the Rye. Bob Dylan even cited Burns’ My Love is Like a Red, Red Rose as his greatest lyrical inspiration.

The words feature son this tea towel are from his poem 'The Rights of Woman' written in 1792, shortly after Thomas Paine had published his Rights of Man. Although Paine's work might have at the time been thought to be relevant to both sexes, in practice men took all the important decisions. So, both Mary Wollstonecraft in her 'Vindication of the Rights of Woman' (1792) and Burns in typically lighter strain, sought to point out the anomaly.

We’ve combined Burns’ words with a self-portrait by his almost exact contemporary, the painter Adélaïde Labille-Guiard, who made her way in the male-dominated world of art both before and after the French Revolution. She campaigned for the Royal Academy of Painting and Sculpture to be opened to women and she was the first woman to be allowed to run a studio at the Louvre. A feminist and artistic match made in heaven!