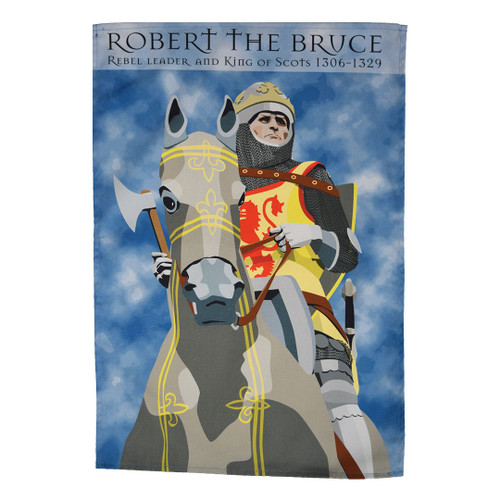 What is so radical about an axe-wielding king of old, you may ask? OK, so Robert the Bruce (Gaelic: Raibeart Bruis), king of Scotland from 1306 to his death in 1329, does belong to another age when the lowly peasant enjoyed few rights and even less notice.

But Robert was relatively benevolent for his time and succeeded in lifting the yoke of oppression exerted by an English Crown that saw Scotland as its own, with its population to be exploited and taxed without mercy. The Declaration of Arbroath, made by Scottish nobles after the Bruce’s victory at Bannockburn, claims freedom for Scotland not in the name of its king but, uniquely for the time, its people.

The illustration on this tea towel is based on the statue at Bannockburn designed by Charles d'Orville Pilkington Jackson in 1964. Bruce's head was modelled on the actual measurements of his skull, re-discovered at Dunfermline Abbey in 1818.

So suspend your reservations about the iniquities of the Middle Ages and celebrate the romanticism of a great leader freeing his people from the yoke of oppression!