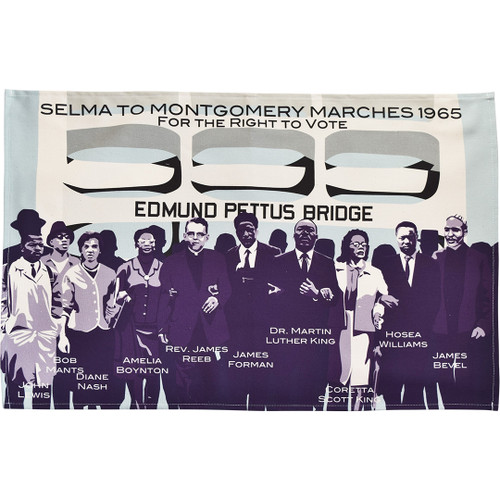 This tea towel commemorates the Selma to Montgomery marches, a series of three protest marches that took place in 1965 in Alabama along the 54-mile (87 km) highway from Selma, Alabama to the state capital of Montgomery.

The marches were organised by non-violent activists to demonstrate the desire of African-American citizens to exercise their constitutional right to vote, in defiance of segregationist repression; they were part of a broader voting rights movement underway in Selma and throughout the American South. By highlighting racial injustice, they contributed to the passage that year of the Voting Rights Act, a landmark Federal achievement of the civil rights movement.

The first march took place on March 7, 1965, when then-25-year-old activist John Lewis led over 600 marchers across the Edmund Pettus Bridge in Selma, Alabama, and faced brutal attacks by oncoming state troopers. Footage of the violence collectively shocked the nation and galvanised the fight against racial injustice. The event became known as "Bloody Sunday".

The second march, a day that would become known as "Turnaround Tuesday", took place on March 9. Martin Luther King Jr led about 2,500 marchers out onto the Edmund Pettus Bridge and held a short prayer session before turning them around, thereby obeying the court order preventing them from making a full march.

The third march started on March 21. Protected by 1,900 members of the Alabama National Guard, FBI agents and Federal marshals, the marchers marched along Route 80 and arrived in Montgomery on March 24. With thousands having joined the campaign, 25,000 people entered the capital city that day in support of voting rights.

The route is memorialised as the Selma to Montgomery National Historic Trail. The Voting Rights Act became law on August 6, 1965.

The figures on this tea towel are brought together as a memento of the marches as a whole and do not necessarily represent a record of precisely who walked alongside whom on separate marches.