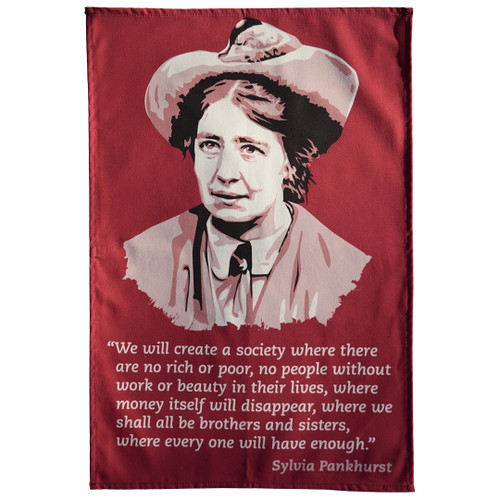 ‘We will create a society where there are no rich or poor, no people without work or beauty in their lives, where money itself will disappear, where we shall all be brothers and sisters, where everyone will have enough.’

Sylvia Pankhurst was twenty-four when she was sent off to prison for the first time. She had been protesting in court at a trial in which women had not been allowed to speak in their own defence. From that point she would be imprisoned on many more occasions, becoming notorious for her suffrage militancy.

A promising artist, Pankhurst had been a student at the Royal College of Art in London before dropping out in 1906 to join her mother, Emmeline, and sister in the Women’s Social and Political Union (WSPU) and the struggle for women’s suffrage. She campaigned with dedication, but she never saw women's emancipation in isolation from her broader socialist politics, a fact that caused tension between herself and her family, who became increasingly hostile to the labour movement. These disagreements drove her to establish her own militant feminist and socialist organisation in 1913 and break away from the WSPU, acknowledging the unique struggles of working class women. She became a prominent left-wing communist and anti-war campaigner, before devoting herself to the cause of anti-fascism (having the seen the brutalism of fascist Italy while studying in Venice). She helped Italian refugees, Jewish refugees, and supported the republican cause in Spain before dedicating her political work to advocating Ethiopian independence.